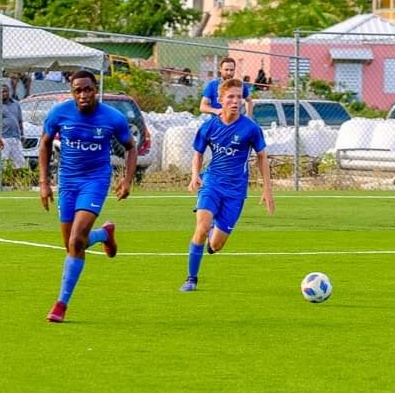 One thing that has always remained constant throughout Andy Bickerton’s tenure as President is the importance of encouraging and supporting Footballers with further education as well as all the on-field opportunities the F.A. provides.

The latest player to join a long list of those able to benefit from such an important programme provided by the FA Executive, with attendance at Lackawanna College in Pennsylvania, USA, is Sheniece St Jean, a Graduate of St Georges High School and a product of the FA Schools and Youth pathways that has already seen her represent the Women’s National team.

A Tough tackling, no nonsense versatile player, St Jean has always been determined not to let anybody get the better of her on the field nor let anything deter her from fulfilling her dreams.

St Jean, who is halfway through a Business Administration Course at the College, has already made the College President’s List, but did admit to finding it hard to adjust to combining schoolwork and the demands of football. St. Jean said:

“getting onto the President’s List is a good feeling, but overall, my goal has always been to maintain a 4.0 GPA so I can attract offers from other Educational Institutions for my academic ability and not just football. At first mixing lessons and practices seemed easy enough, but by mid-season the buildup of assignments and travelling to games began to make me procrastinate! However, I had set my goal, so did my best and managed to balance everything very well”

Apart from  adjusting to the Academic demands of College, St Jean also had to learn a new style of playing as well as getting used to the weather ” The standard is higher and my new team plays much more long ball football, as opposed to say when I played for the Ballstars where we kept the ball on the ground more. And playing in the cold was really bad!”

As for the FA, as President Andy Bickerton noted “We are very pleased that Sheniece has made the Women’s Soccer team at Lackawanna College and are particularly proud that she has also made the Dean’s List in her first year. She has demonstrated exactly what the F.A. is looking for when awarding football scholarships which is that our awardees improve their football skills whilst taking advantage of the educational opportunities they have been given.”

St Jean is heading back to college at the end of August and despite staying fit and ready for her second season by following a programme given to her by Coach Les Smith, she has to get used to new dates for the season “our season is no longer in the Fall as the NJCAA moved it to the Spring, but I really want a break out season. I have been working hard on my fitness and will be playing left defense. It is a different position for me, so it took some time to get used to. The Coach also has me playing closer to my opponent, so they don’t have time to control the ball and turn me, plus I can react quicker, read the play, and cut out passes”

The Season could also promise to be a break out year for the whole team as last year they often played short handed “last time out we had to even play 8 v 11 due to injury and availability, but we have a full squad so we should be even better as a group”

The squad was made up of almost entirely Freshman for 2019 / 20 and they wrapped up their most successful season in 7 years, with the Lady Falcons finishing with an overall record of 4-10 and the 4 wins are the most in a single season, since Lackawanna finished 5-8 in 2012.

Sheniece also has simple words of advice and encouragement for other young players “Practice and follow your dreams and if you really love soccer like I do, then you will make it”