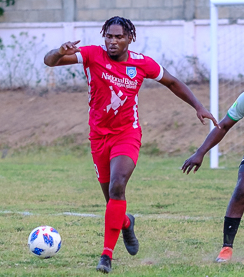 The Islanders FC moved a step closer to yet another Championship title, but the Panthers FC also stayed in contention with a win against Old Madrid FC, as the National League continued over the weekend.

Playing at the National Stadium venue in East End / Long Look, the Islanders were indebted to a 68th minute strike from the inform Kevin Fisher-Daniel to secure all three points against VG Utd with a 1-0 win.

The Panthers FC moved into fourth on 25 points following a 3-1 victory against One Caribbean. Louisnel Timothe put the Panthers ahead in just the 4th minute before Sheldon Harry doubled the advantage in the 32nd. Carlos Septus pulled one back on the stroke of half time, but One Caribbean were unable to find an equalizer and conceded the third goal right at the final whistle, scored by Wayne Phillip.

Lion Heart FC and One Love FC, both sitting mid table, battled it out to a 1-1 draw that saw six yellow cards and the weekend was rounded out by the Rebels FC beating Old Madrid FC, 5-0, on goals from Enrico Bowen (14th minute), Jamal Sargeant (25th), Denvin Jones (22nd, 62nd) and Curtly Peters (82nd).

On Saturday 7th November, the Sugar Boys FC take on the Wolues FC at the National Stadium in East End/ Long Look with a 4.15pm kick off. Meanwhile on Sunday 8th November, the Islanders FC are back in action against the Panthers, also at the National Stadium at 4pm, and over on Virgin Gorda, at the Recreation Ground the Rebels FC face One Love Utd at 5.45pm and Old Madrid FC play Virgin Gorda Utd at 8pm.