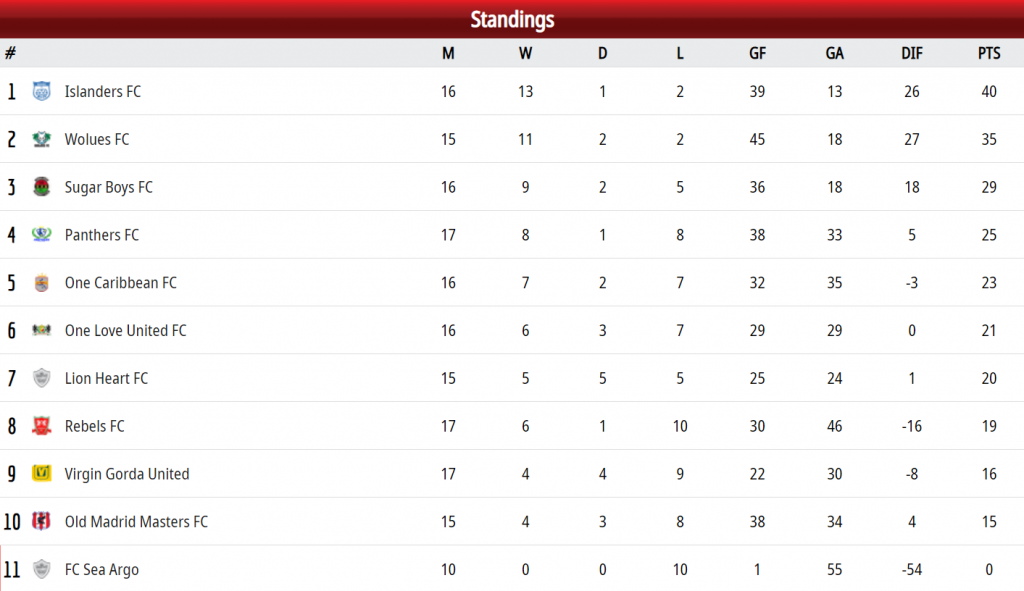 As the National League continued over the weekend, the Wolues FC smashed eight goals past One Caribbean, VG United left it late to salvage a point against the Rebels FC and there were also wins for the Sugar Boys FC and One Love FC.

The Wolues FC were three goals to the good against One Caribbean FC at the National Stadium Venue, East End / Long Look, inside the first seven minutes following a brace from Ian Chambers and the first of what turned out to be a Noel Maxwell hattrick.

Johnny Bissainthe gave One Caribbean a glimmer of hope in the 17th minute and at half time the score remained 3-1.

Luca Reich then scored in the 62nd and 72nd minutes to put the game and the points beyond doubt, and although Erol Van Der Meulen scored a second for One Caribbean from the penalty spot in the 75th to make it 5-2, Maxwell notched his second and third goals in the 88th and 89th minutes respectively before Christopher Farmer made it 8-2 in added time at the end.

Meanwhile, the most dramatic game of the weekend unfolded over at the Virgin Gorda Recreation Ground, where VG United found themselves two goals down against the Rebels after Curtly Peters converted a 15th minute penalty kick and Austin Prentice doubled the lead in the 34th. However, Marknique Williams pulled one back in the 39th minute and then after a dogged and determined display VG finally equalized in front of a large partisan crowd when Johnathon Gonzalez slid the ball home in the 6th minute of added time to earn a point.

The Sugar Boys FC also didn’t disappoint their home fans as they had no problem in overcoming Lion Heart FC  2-0 although it took an own goal in the 29th minute to set them on their way, before Rolland Roberts made sure of the win, scoring the second goal in the 72nd minute.

One Love United FC also had a comfortable win, beating the Panthers FC 4-1 with four first half goals from Rushedo Robinson, Richard Morgan, Mauricio Guevara Villanueva and Carl Stewart almost settling the match before it began and Vanrick Depesche scoring the Panthers only goal half way through the second half.

Next Saturday, November 21st, Old Madrid FC play the Wolues FC at the East End / Long Look National Stadium with a 4.0pm kick off, whilst on Sunday November 22nd, the Rebels FC face Lion Heart FC, also at East End / Long Look at 4.00pm and over on Virgin Gorda, the Sugar Boys FC take on One Caribbean FC at 5.45pm and then One Love United FC clash with Virgin Gorda United FC AT 8.00pm.