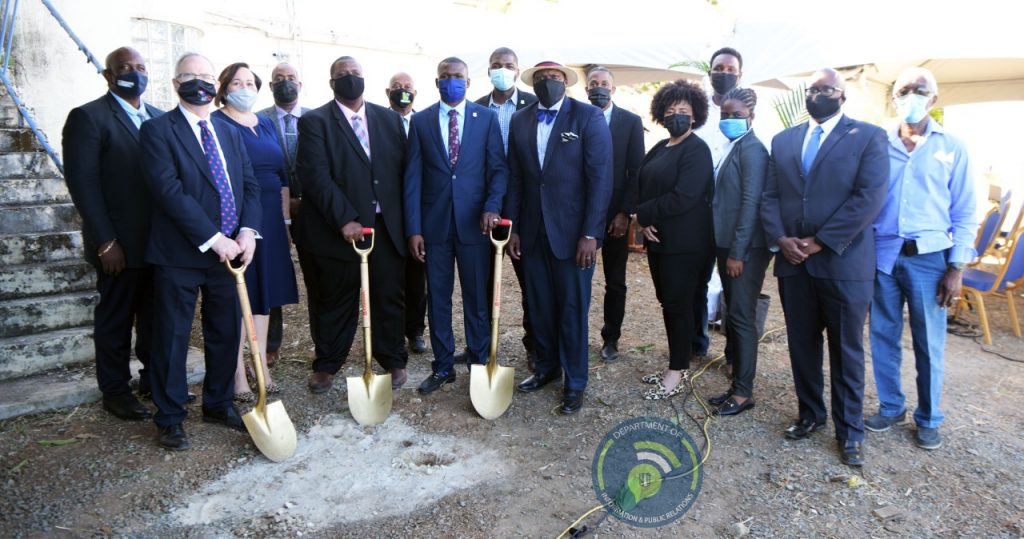 With heavy machinery and ceremonial shovels, demolition of the former home of the Department of Disaster Management (DDM) and construction of a state-of-the-art new National Emergency Operations Centre (NEOC) began with a groundbreaking ceremony this week in McNamara.

The resilient and high-technology building will serve as the hub for disaster and emergency response in the Territory and the offices for the Department of Disaster Management. During emergency activations, Territory leaders and others with responsibilities within the National Disaster Management Plan will coordinate response activities from the NEOC, ensuring that residents continue to receive critical Government services during and immediately after a hazard impact.

His Excellency the Governor Mr. John J. Rankin, CMG, said at the ceremony that the new building will strengthen the Territory’s capacity to respond to emergencies, which is a key component of protecting lives in the Virgin Islands.

“Effective disaster management is vital for the safety and security of all the people in this Territory. I pledge as Governor to prioritise my responsibilities in this area, and always do what is best for the safety of all of the men, women and children living here,” Governor Rankin said.

He added that it’s encouraging to see the Territory take advantage of the opportunity presented by extensive rebuilding needed after the impacts of 2017.

“The hurricanes offered an opportunity to build back better and the National Emergency Operations Centre embodies that. This robust new building, once complete, will support work to further improve the safety and security of all of our communities, as well as contributing to the further resilience of the dedicated public servants who, when the worst happens, will work tirelessly to manage and respond to disaster.”

Director of Projects in the Ministry of Finance Dr. Drexel Glasgow, whose team has overseen the tender and procurement process for the new building, said that the building will serve as a model for resilient and environmentally friendly critical facilities.

“This building is expected to be the first of its kind in the region, combining resilience, sustainability, and smart concepts in a facility that is expected to allow the core of Government to continue to function during and immediately after the passage of an event,” Dr. Glasgow said.

DDM Acting Director Mr. Jasen Penn thanked all those who have contributed to the building’s development so far, adding that while the previous building allowed the DDM to carry out their work during the hurricanes of the 1990s and the floods that followed, he is grateful that the Territory will face future emergencies with the support of a safe new structure.

“We will soon have a New National Emergency Operations Centre that is resilient, meets international building and safety standards, and is capable of serving the people of the BVI in a period when we face multiple hazards; and possibly even hazards we don’t yet know about. We wait for the day when it is complete and it can once again be a model for the region and beyond to see,” Mr. Penn said.

The three-level, 18,028-square-foot structure is expected to be completed in 24-months. Construction of the building is being carried out by a joint venture between local firms Tandem Development and D & B Heavy Equipment Services Limited. The building was designed by Virella Crespo and Associates, who will also provide construction supervision throughout the development phase of the building. Funding for the $9.8 million-facility comes from the Territory’s Rehabilitation and Reconstruction Loan, facilitated by the Caribbean Development Bank.