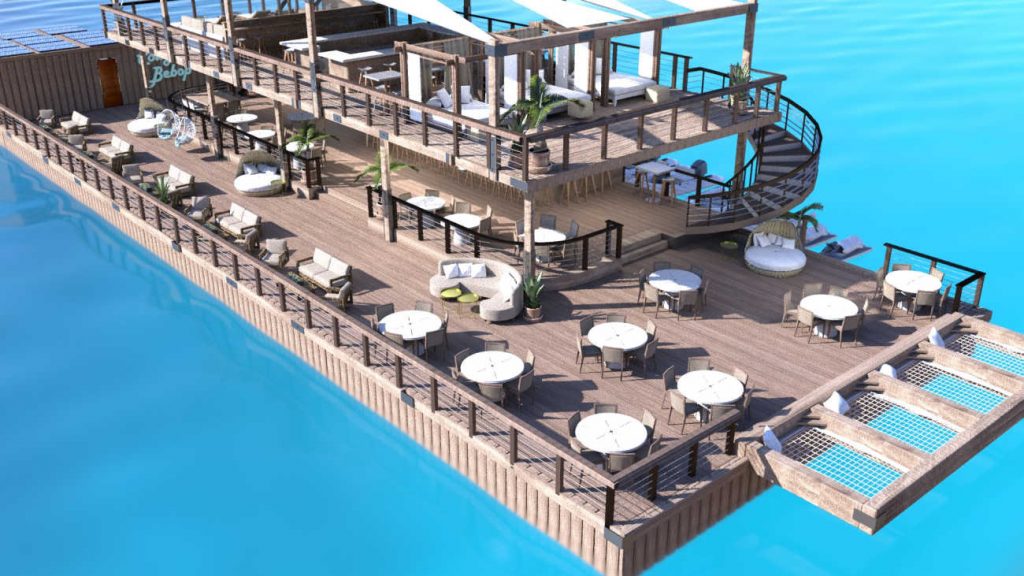 After extensive testimony and grueling questions by the members of the V.I. Board of Land Use Appeals, The Bebop Floating Lounge was granted its request for a major permit, a recently issued release makes known. The permit had been originally denied last September by the St. John Coastal Zone Management Committee.

“While there are additional steps we must take, including presenting before the V.I. Legislature and other federal approvals, we are so pleased that the BLUA members saw fit to advance our request to place our restaurant in our original location,” Bepop spokesman Alex Golubitsky said.

The Bebop was represented by Attorney Malorie Winne Diaz at Thursday’s BLUA hearing. “After researching several alternate locations for our proposed floating lounge, we have maintained that the area between Mingo Cay and Grass Cay are the best suited for our business,” Golubitsky said.

In making the motion to overturn the St. John CZM’s decision and approve the major permit application, BLUA member Roberto Cintron asked the attorney for the St. John CZM what facts supported their denial of the application, and, not receiving a satisfactory answer, he made the motion in The Bebop’s favor. The motion was unanimously approved. Members present in addition to Cintron were Jim Hindels, Fred Vialet, Jeffrey Boschulte, and Acting Chairman Jose Penn.

According to the release, Golubitsky has maintained that the two-year process seeking a permit to begin operations of the fine-dining structure near St. John has created positive excitement in the community. He also acknowledged that the proposal has also met with some resistance from concerned residents.

“Throughout the permitting process, we have listened attentively to the community in order to improve The Bebop as a product which led to several changes and adaptations to our original model and making our proposed dining venue one of the safest and eco-friendliest in the business,” he said.

He added, “We have worked with experts and professionals in the food and the marine boating industries to create a business model that will be one to be emulated. We have listened and made changes accordingly to ensure a very safe and enjoyable experience for guests and staff to be aboard the well-thought-out structure. And we continue to be encouraged by the support we have received from the marine community and other residents to develop an innovative business that will attract visitors, give locals new options for dining, and boost our local economy.”

Board Member Hindels moved that the approval bear the original conditions by CZM. His motion was unanimously approved.