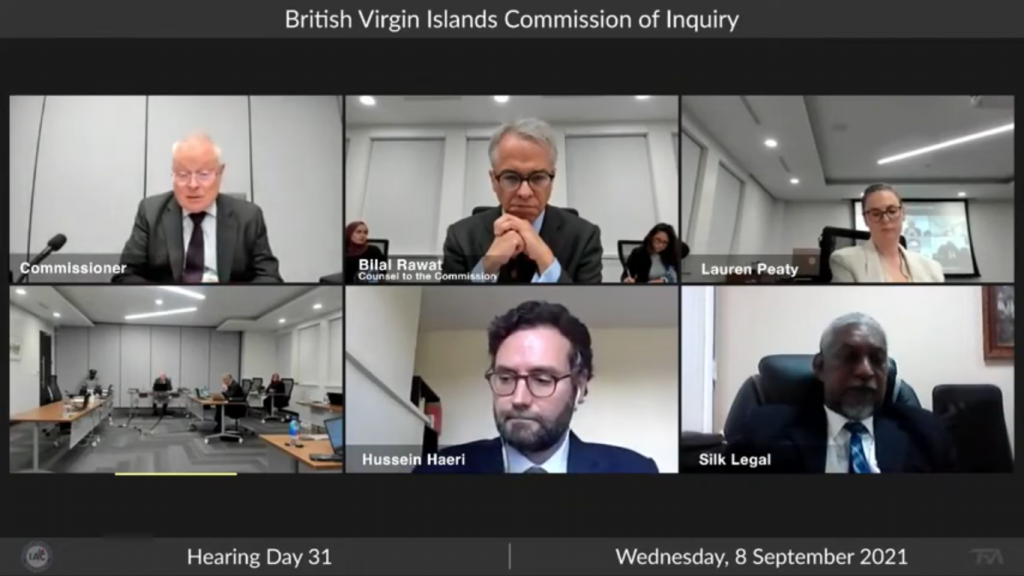 The Commission of Inquiry (COI) continues to face its challenges with regards to information received from the government, this time a document nearing 1000 pages which was poorly submitted to the COI from the Premier’s Office.

This is according to the COI’s attorney Bilal Rawat who made the statement during Wednesday’s hearing, after receiving the document on the night of Tuesday September 7.

Rawat said the document was poorly structured according to the protocols of the Commission and lacked substantial information such as proper headings and a signature to pinpoint who exactly was responsible for the submission of the document.

He said, “You made clear you wanted them in the format set out in the protocol. Plainly the document that we have received is not in that format. The PDF of it is headed ‘Note on Farmers and Fisheries’ but when one turns to the document itself, it is not entirely clear who it’s directed to. It is headed in the matter of the territory of the Virgin Islands, Commission of Inquiry 2021 and the Commission of Inquiry Act. But then it has a further heading, which is ‘Response to the Office of the Premier to the evidence to the reports of the auditor general and the internal auditor concerning the Farmers and Fishers and Schools and Churches Grant programs.”

“So, it is not immediately clear whether this is a document that is intended for the commission or whether it is a document that is a response to the reports that were issued by the auditor general and the internal auditor on which you have received evidence and heard oral evidence. It may be directed to both,” he added.

Attorney Rawat also addressed a number of other concerns regarding the document, which included its large size given the present stage of the inquiry process and the nature of the submission.

“No notice or proper notice was given that this was the sort of document that was anticipated. As I’ve said, it wasn’t the impression I got when this point was raised. Third, no permission was sought from you as Commissioner to put in a document at this size, which taken together with the annexes runs close to 1000 pages. Fourth, it’s not in the form that you will know Commissioner from other evidence that responses to reports for example, of the Auditor General are drafted in. Those are conventionally drafted by the permanent secretary and are considerably shorter than the document that is now been provided to you,” he expressed.

“The final point I’d make here is that this has been plainly, I would say, have been drafted by counsel and it raises a number of questions. First really, what is it? What is it intended to be? Because it is a mix of legal submissions and factual statements or evidential statements and that begs the question, who is going to speak to it because what we don’t see at the end, unusually is the document signed. So it’s not either signed by someone making it as a witness statement or it’s not signed by counsel making it as a legal submission,” he further explained.

Rawat said the submission by the Premier’s Office showed “a complete lack of courtesy to the Commissioner” to produce a document of the size and detail, at a relatively late stage in the inquiry’s proceedings, which made it very difficult to comprehend.

He said even more concerning, was the conflict the document placed on the process of procedural fairness, as the parties addressed in the document may not have been aware of its submission, therefore putting them at a disadvantage of the proper time needed to respond to claims.

“You have made clear Commissioner that you place a high value on procedural fairness and that you will strive to ensure that all witnesses are treated fairly. And we have heard submissions from participants that those that they represented must be treated fairly. But in my submission those participants and their lawyers owe a duty to this commission to ensure that all witnesses are treated for them. You heard in June from the auditor general and the internal auditor.  This document contains criticisms of those two public offices. Their reports were issued earlier this year. They gave evidence on it earlier this year and yet the response, if this is what it is to those reports, is now being provided in September at a time when the expectation is that the commission is reaching at least its final stages of its hearings. Everything must be done to ensure that these two public offices are not taken by surprise,” Rawat expressed.

Attorney Hussien Haeri, who is representing the Attorney General confirmed that the document was indeed a submission to the Commissioner and the Commission of Inquiry.

He said the completion of the document was a contribution from various personnel within the Premier’s Office which included the Premier and his Permanent Secretary, along with legal counsel.

The Commissioner then instructed attorney Haeri to write in email to the COI confirming that the Premier and the Permanent Secretary is in agreement with the full contents of the document and have nothing other to add to the document.