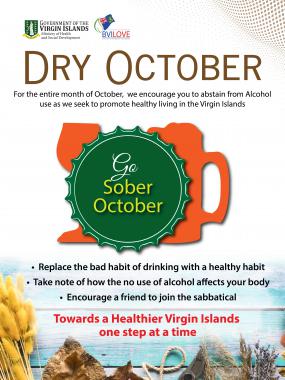 Residents of the Virgin Islands are being challenged to “Go Sober for October” following the launch of a campaign to reduce the harmful use of alcohol Territory-wide.

The First Annual Dry October campaign was launched by the Ministry of Health and Social Development and is aimed at sensitizing the people of the Virgin Islands to the harmful effects of the abuse of alcohol and encourage people to drink less.

Public Health Nutritionist Ms. Patrice Maduro said that according to the 2009 STEPS survey, excessive consumption of alcohol is a major health risk and the behavior is occurring increasingly among the male population with 50% consuming alcohol and 27% engaged in heavy episodic drinking.

During the month of October, persons are encouraged to think about their alcohol consumption and to take on the challenge to abstain.  Ms. Maduro said being alcohol-free for 31 days shows us that we do not need alcohol to have fun, to relax, or to socialise.

“It helps us learn the skills we need to manage our drinking. That means that for the rest of the year we are better able to make decisions about when we drink and how much, so we can avoid slipping into drinking more than we really want to,” she said.

Persons are urged to use the free ’TRY DRY’ app to track and set their own custom goals for their drinking year-round and take on a dry month (or longer) any time. The app is available for both Android and Apple devices.

Persons who would like to support and document their journey can use the hashtag #BVIGoSober on the Facebook social media platform.

The Government of the Virgin Islands is committed to improving the health of the people of the Territory.