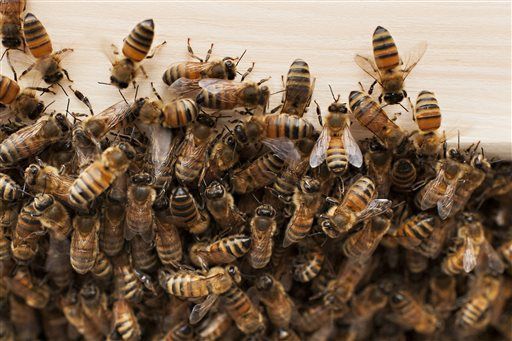 Three persons lost their lives after they were attacked by bees in three separate incidents on Thursday and Friday in East Berbice, Corentyne. Those killed are John Sutherland, 57; Dorothy Muriel Adams, 58; and Sirpaul Hemraj, 62, called “Rishi”.

Hemraj of Lot 95 Mibicuri, South Black Bush Polder (BBP), who was a drainage and irrigation(D&I) worker was pronounced dead at the Mibicuri Hospital after he was stung by bees in the Johanna BBP, backdam around 13:17 hours on Friday.

Reports indicate that Hemraj left the Mibicuri Neighbourhood Democratic Council (NDC) office in the company of two others on his motorcycle to check on an excavator, who was doing drainage works, when the bee attack occurred.

He was sitting on his motorcycle while Chandradall Nankoo, 50, and Rajendra Mohan, 49, both rangers attached to the region and Michael Tyndell, 25, a mechanic attached to the NDIA were standing next to the said excavator when someone shouted “bees!”

The trio ran in different directions seeking shelter while Sirpaul was left behind.

About half of an hour later they all returned to the excavator where they saw Sirpaul covered in mud and what appears to red swelling marks about his body. He was rushed to the Mibicuri Public Hospital where he was pronounced dead on arrival.

Meanwhile, on Thursday, the motionless body of Sutherland of Eversham, Corentyne, Berbice, was found on the ground in the Eversham backlands after he was attacked by bees. The incident occurred at around 12:20 hours.

According to reports, Sutherland had left his home on a tractor with two others to show them a rice field that had to be ploughed.

While in the field, Sutherland and another man were sitting on the tractor fender while the driver was ploughing the rice field. During the ploughing, the driver of the tractor made a sudden stop and shouted “bees!”

The driver and the other man jumped off the tractor and made a run for safety; however Sutherland, who had one foot, was left behind. Moments later, the duo saw the body of Sutherland lying motionless on the ground with several sting marks about his body.

One of the men was also stung several times. He was taken to the Port Mourant Hospital where he was admitted a patient.

Also on Thursday, Adams, a housewife of Rotterdam, East Bank Berbice also succumbed after being stung by bees.

According to her reputed husband, Vishnu Persaud, at about 17:00 hours, she went to a shop to make a purchase and about 10 minutes after he was called by a passerby, who told him that his reputed wife was stung by bees and was lying under a house, some 400 meters away from his home.

He immediately went to her rescue and was also stung by the bees.

An eyewitness, Stevon Ganpat, recalled it was “sad” sight.

He noted that a person who lives at the house where the bees came from ran out of the house and a swarm of bees followed. He added that he noticed several animals were also on the road, running in different directions, seeking shelter from the bees and then he saw the woman’s upper body covered in bees.

“I see this woman walking coming and if you see bees on this woman. You can’t see her face, from her waist go up you can’t see anything that’s how thick the bees was and she just sat there on the bench at the bus shed and she hollering for help but nobody couldn’t help her cause the bees were so thick but in that situation I left my pregnant wife upstairs and ran down with some gasoline and water and throw it on her… if y’all were here and see the amount of bees on that woman y’all would cry,” he recalled.

Several other persons in the area were also stung by the bees.