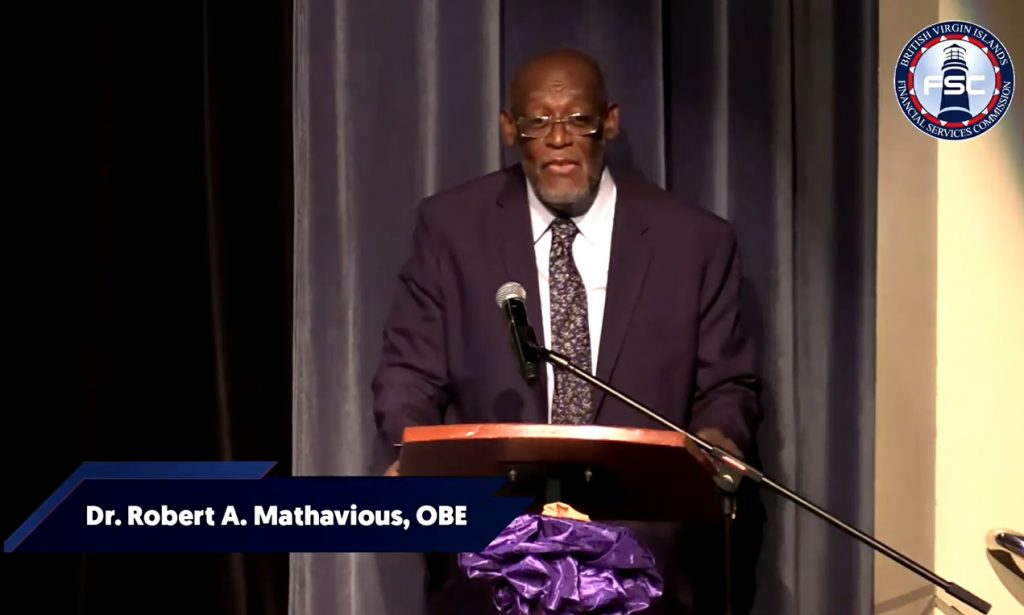 Pioneer of the BVI Financial Services Industry Dr. Robert Mathavious OBE says he believes the future of the industry is in great hands as he expressed great confidence in the ability of the current stakeholders to transition the sector to the next level.

Dr. Mathavious made the comments while speaking at the Meet the Regulator Forum on Tuesday November 16, an event which was held to honour the pioneer for his more than 25 years of service in the financial services industry.

“I have run the course. I have completed my leg of the race and have willingly handed off to a new generation of well prepared, well trained extremely competent and battle tested leaders. The baton for the management and stewardship of the industry has been passed to a new team led by Kenneth Baker. I trust that you will give them no less respect and support than you gave me,” he stated.

“As an optimist and a futurist, I believe that the future of the industry can be better and even more productive than its past. I believe that more than anything else, our success in the future as a country or as an industry will depend on capable and transformational leadership and on highly performing and highly motivated and differentiated service excellence that leverages our strengths and builds on our past successes. With goodwill and incorporation of all stakeholders we can do this. We must do it,” he added.

One of the luckiest men alive

Dr. Mathavious said he considers himself to be one of the luckiest men alive to be recognised and honoured for the work he did, within a profession he absolutely loved.

He said while the attention was placed on him, his achievements would not have been possible had he not had a solid set of individuals to call his team over the years.

“Today I consider myself the luckiest man on the face of the earth to be recognized and honoured for the work that I was specifically trained for, paid for, lived for, cherished and passionately enjoyed. It simply does not get better than this. But you do not get to a position like this alone,” he stated.

“Many, many people in both the public and private sectors, far too numerous to mention, have contributed to any success I may have been credited for and I will forever be indebted to them. I merely stand on the shoulders of the staff I have been privileged to work with over the years at the Ministry of Finance, the Finance Investigative Agency, the Financial Services Institute and the Financial Services Commission. They are and have been the unsound heroes and sheroes of the success. They too must share in any accolades, honours and rewards I receive. In truth and in fact, they have been the wind beneath my wings, it is they who have raised me up to far more than I ever thought I could be,” he explained.

Tough journey ahead but very achievable

The financial services pioneer also warned that the journey ahead will not be the easiest, but encouraged all stakeholders to keep persevering as the task is one that can be achieved.

He said, “The job is far from over and we are not yet out of the woods. Old habits die hard and we have come too far to turn back. Renewed efforts with a stake in the industry is now necessary. Yes, you must ensure that our offerings remain relevant and they continue to meet the legitimate needs of the discriminating clientele we seek to serve and crucially, we must ensure that all we do remains compliant. In that sense, we’ve been here before but today’s world demands no less of us than yesterday’s.”

He continued, “In an increasingly hostile competitive environment for the type of businesses we seek to attract to our shores, we will be called upon to do more than ever before to preserve, protect, defend and enhance our image as a centre for the conduct of legitimate international business. We will need to train and retrain, to upscale and rescale, to liverish technology and to find new markets for our offerings.”

As Managing Director/Chief Executive Officer of the FSC, he was responsible for establishing and maintaining the territory’s regulatory practices to ensure compliance with international standards. He has played a pivotal role in charting the course of the development of the BVI financial services industry for over 35 years. The industry now brings in an approximate annual revenue of US $200 million for the BVI.

Dr Mathavious holds a Bachelor of Science Degree in Economics from the University of the West Indies and a Masters of Business Administration from Georgetown University in the United States. In 2013 he was awarded an honorary doctorate degree from the University of the West Indies. He was FSC’s first Managing Director/CEO since this statutory body was created in 2001 with the enactment of the Financial Services Act. Mr Ken Baker has succeeded him.