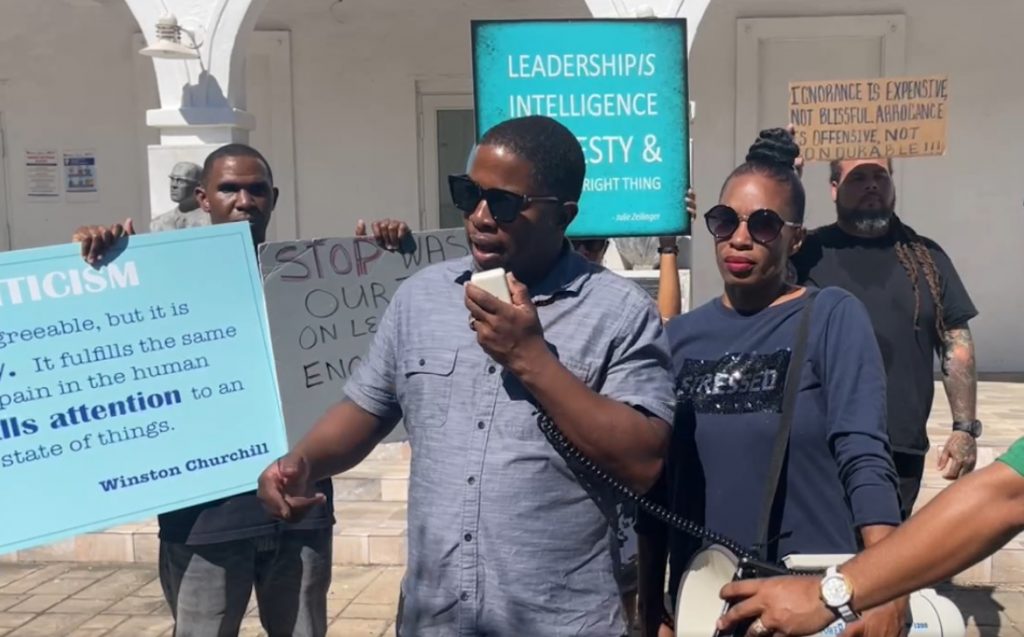 Opposition Legislator Melvin ‘Mitch’ Turnbull believes that the present Andrew-Fahie led Virgin Islands Party Administration is a failed government, following their recent decision to ignore the people of the territory on a number of topical issues.

Turnbull made the comments during the re-enactment of the historical 1949 March on Monday November 22.

He said the most recent occurrence where the government ignored the voice of the people was when Premier Fahie opted to go ahead with a motion to decide whether Speaker of the House of Assembly Julian Willock will pay his legal fees as a private citizen are have them paid in his capacity as Speaker, despite Supreme High Court Ruling.

Turnbull said the territory needs leadership that is accountable to the people, which will take the BVI to the next level.

“It’s important that we are here. We are calling for justice, we are calling for leadership, leadership that matters but leadership with integrity. Not one that changes depending on who’s in front of them, not one that changes depending on what reaction they want. We need leadership to take this territory and the next generation to the next point that we need to go to. We can’t be talking about self-determination, we can’t be talking about independence and all the things that we’ve been talking about and our actions depict something completely different,” he stated.

He added, “So, Honourable Premier, the leadership of this government, this present sitting administration, you are accountable to the people. You had a point where 1200 signatures along with the voices of the people, together with a march that happened in the House of Assembly was put forward and you ignored the voice of the people because you felt that it was your duty to go into the House of Assembly and give options that were there.”

“It is continuing to unfold and unravel and I call this a failed government, but there are people in this territory who have had enough and I’m glad everyone is here today,” the Second District Representative further stated.

Direct conflict to the infrastructure set by BVI forefathers

Organizer of the protest and community activist Cindy Rosan-Jones spoke to the reason behind hosting the peaceful march.

She said the decisions being made by the present government administration is a direct conflict to the infrastructure that was put in place by pioneers of BVI politics.

“We decided on this day to do a march in protest of things that have been going on in the BVI in terms of leadership, in terms of the motions being made in the House of the Assembly by the Premier, in particular the defiance of the ministers to bring a motion to pay the Speaker’s fees which the people are not in support of. So we chose today to do that because as we think about it and as we look at it the decisions that are being made in the House of Assembly are challenging the infrastructure that these guys marched to set in place for us,” she explained.

She added, “It’s bringing down our institutions that have been pulled to the ground by this administration and we’ve had enough. So we’re out here today and we’re marching against that.”

No confidence in the ability of gov’t to run BVI

She outlined a number of her concerns with the current government, stating that presently there is no confidence in their ability to run the territory.

“Our ancestors fought that we may have a seat at the table of governance in these Virgin Islands and we are here squandering it with immoral thinking and oppressive behaviour, just like the government of that day. This needs to stop now,” she asserted.