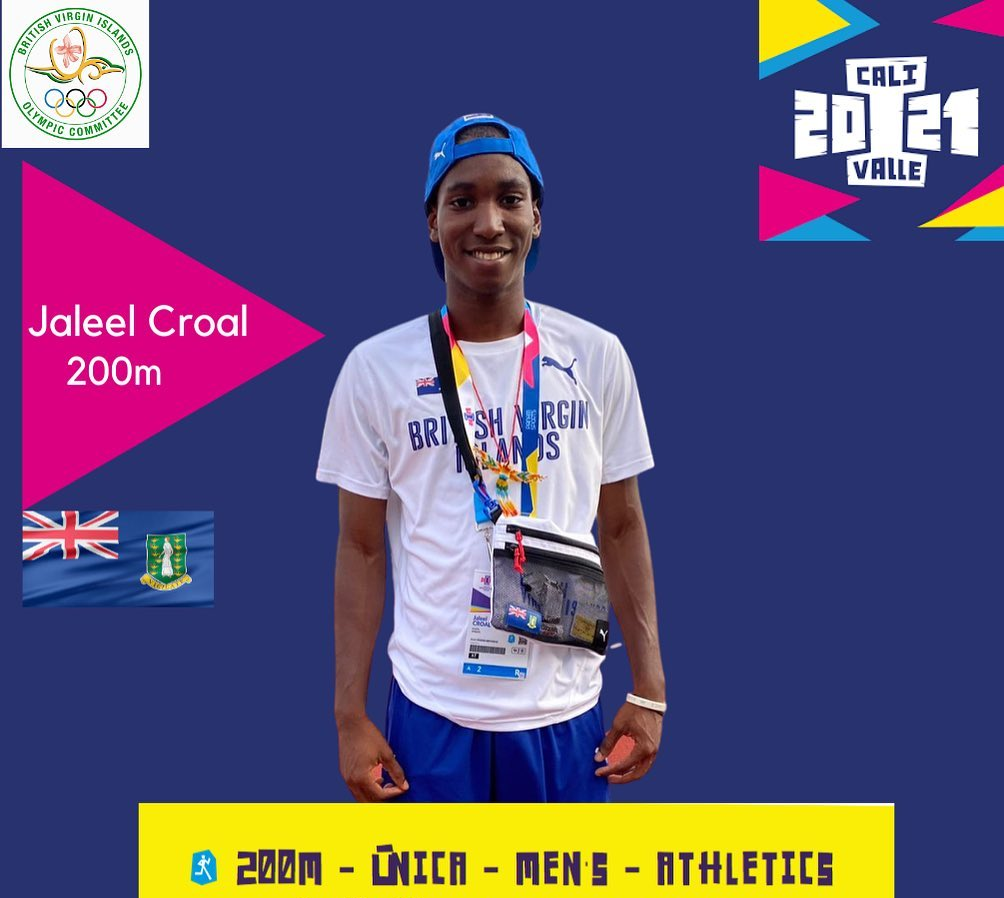 Top junior sprinter Jaleel Croal missed out on a podium finish in the final of the 200-meter men’s event at the Cali 2021 Junior PanAm Games in Columbia, but sat a new personal best time breaking the 21 second border for the first time.

Jaleel delivered a time of 20.93 seconds to finish fifth in his first major games which was also his season opener.

The new time smashes his previous personal best time of 21.10 seconds, which he achieved at the end of last season.

The medals in the final went to Ecuador’s Anderson Marquinez who won the race in a time of 20.51, Lucas Vilar of Brazil who placed second with 20.59 and Brazilian Lucas Rodrigues Da Silva who took bronze with a time of 20.68.

Speaking after the race Jaleel promised that he has a lot more in store, adding that he will be showcasing it on the track in his upcoming events.

He said, “When I got on the track my main goal was to have fun and run a 21 so after a nice start and execution and finish and a 20.93 – even though I came 5th – I was the happiest man on the track at that moment. There’s more to come and I already marked the guys’ faces!”

Meanwhile, Coach Ralston “Grandfather” Henry said Jaleel’s performance on the track was exceptional considering the opponents he ran in the final.

“This is the peak time of season for the sprinters from Ecuador and Brazil and to see him come and run that fast with them is a major accomplishment,” Coach Henry stated.

Jaleel has qualified for the World Athletics U20 Championships next August with his semi-final time of 21.24 and he will be back at the same stadium to compete in that event.

The team ended the competition winless after losing their first match to Puerto Rico 5-21 then their second against Colombia 9-15.

Chef de Mission Adam Murrills commented on the team’s performance, stating, “After initially losing out 21-5 to Puerto Rico in their first match to only a day later be pushing Venezuela in a much closer affair shows how far the team has come in such a short amount of time.”

He added, “It also shows a strong mentality in their ability to problem-solve, adapt, work together and improve throughout what has been the BVI’s first International Competition for Basketball since 2010! Having spoken with the guys I know that they’re proud (and rightly so!) of how they performed and how they improved throughout the tournament and they’re keen to push on after this and hopefully experience more International Competition in the future!”

President of the BVI Olympic Committee Ephraim Penn who attended the entire competition, said he was impressed with the level of application and incremental improvement of all athletes.

In addition, he said the camaraderie and supportive attitude of the athletes from the different sports played a critical role in offering support since physical attendance of supporters was not possible at the event.