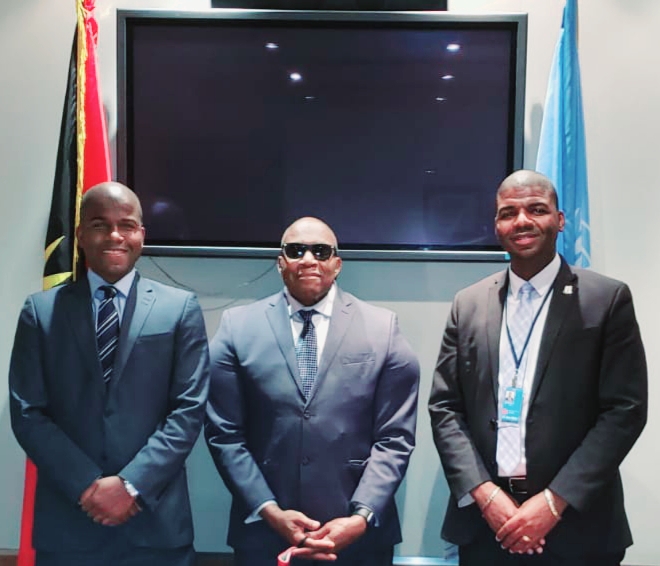 The British Virgin Islands (BVI) and Antigua and Barbuda have pledged closer cooperation on the agenda of Small Island Developing States (SIDS) during a meeting between Deputy Premier Dr. Hon. Natalio D. Wheatley and Ambassador H.E. Dr. Walton Webson, Chairman of the Alliance of Small Island Developing States (AOSIS), at the Permanent Mission of Antigua and Barbuda to the United Nations (UN) in New York.

The Deputy Premier and Ambassador Webson discussed the importance of global efforts to arrest climate change which has already affected SIDS such as the BVI and Antigua and Barbuda that were both devastated by Hurricane Irma in September 2017. They also discussed the need for SIDS to access concessional financing to help build climate resilience, as well as receive support from the international community to achieve the sustainable development goals (SDGs) by 2030 and conserve and protect their marine environments. The external pressures faced by small financial jurisdictions in the world economy was also highlighted as a critical issue for SIDS.

Deputy Premier Wheatley and Ambassador Webson agreed that Antigua and Barbuda and the BVI should deepen engagement on the SIDS agenda, particularly as neighbours and in the context of CARICOM, OECS and ECLAC.

Speaking on his meeting with the Chairman of AOSIS, Hon. Wheatley said, “I was grateful for the opportunity to meet Ambassador Webson who is performing a very important leadership role on behalf of SIDS. There is a great deal for the BVI and Antigua and Barbuda to collaborate on in this regard. Antigua and Barbuda has the full support of the BVI in their efforts to gain international support for SIDS. We look forward to working with our close neighour on the environmental and economic matters that are critical for us in the Caribbean and beyond.”