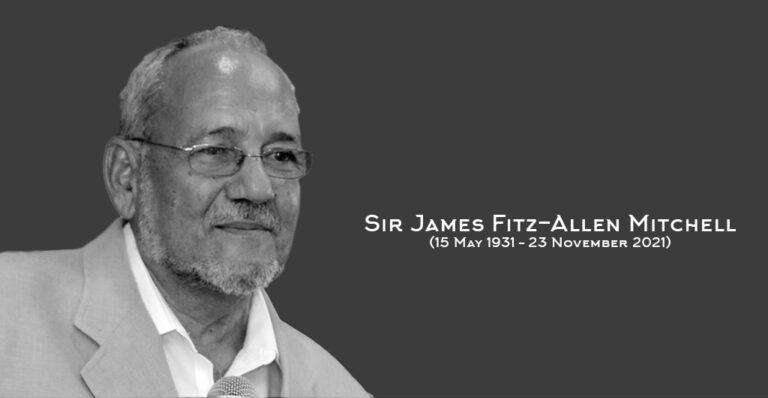 Sir James has been diagnosed with dengue and other health conditions.

The 90-year-old statesman succumbed to death early today in his home in Bequia days after being discharged from Queen Elizabeth Hospital in Barbados.

Mitchell’s death has brought to an end an era in the history of St. Vincent and the Grenadines, since he had been the last surviving parliamentarian at the time when the island gained political independence from Britain on October 27, 1979.

In a statement issued by his daughters, Sabrina, Gretel, Louise and Gabija, the family thanked everyone who supported them during the ordeal.

“We appreciate the outpouring of concern from every segment of the Vincentian populace for Sir James. We also thank his friends and colleagues from across the world who have reached out. The family is truly humbled by the tremendous solicitude and support at this time.”

Sir James Mitchell, a Privy Councillor since 1985, economist, agronomist and politician, has been a dominant figure in St. Vincent and the Grenadines for almost three decades.

He initially entered politics in 1966 by winning a legislative seat as a candidate of the St Vincent Labour Party and served as the Minister of Agriculture from 1967 to 1972.

After serving as the second Premier of St Vincent from 1972 to 1974, he founded the New Democratic Party (NDP) in 1975. The party, which is now the opposition, is headed by Godwin Friday.

Mitchell later became the second Prime Minister of St Vincent, from 1984 to 2000.

After his retirement from electoral politics, Sir James campaigned with the NDP in the general elections of 2001, 2005, 2010, 2015, and 2020, as well as the constitutional referendum of 2009, when the NDP persuaded the electorate to reject proposed changes to the 1979 constitution that would have allowed the Trinidad-based Caribbean Court of Justice (CCJ) to be the island’s highest court.

“Sir James was a man of an extraordinary career, conviction and merit who played an essential role in shaping regional institutions such as the OECS and CARICOM.”

Gonsalves has instructed the Police to have all national flags flown at half-mast for 3 days and on the day of his respective funeral.

Barbados PM Mia Mottley said she would always treasure the learning and memories with Sir James.

“I have always been fascinated by his ever-present charm and wit, qualities that were equalled only by his knack for storytelling. I will always treasure my many years of travelling to Bequia and the privilege of communicating with him. We shared a passion for the Caribbean Sea and together recognised that with the right vision it was more of a cord that bound us together than a gulf that separated us. So long, Sir James. You have served us all well. Rest in peace.”

The New Democratic Party (NDP), which Sir James founded, said that his legacy will never be forgotten.

“Sir James is undoubted to be credited for numerous developments in our country. He was the embodiment of a true statesman and a nation builder.  Sir James was much loved by everybody that knew him.”

Similarly, the Caribbean Democrat Union noted that the CDU continues to advance its values of good governance practice because of Sir James – who is one of the founding members of the regional alliance.

Other leaders like Dominica PM Roosevelt Skerrit and British Virgin Island Premier Andrew Fahie also extended condolences to the family and friends of Sir James on behalf of their respective Government and people.