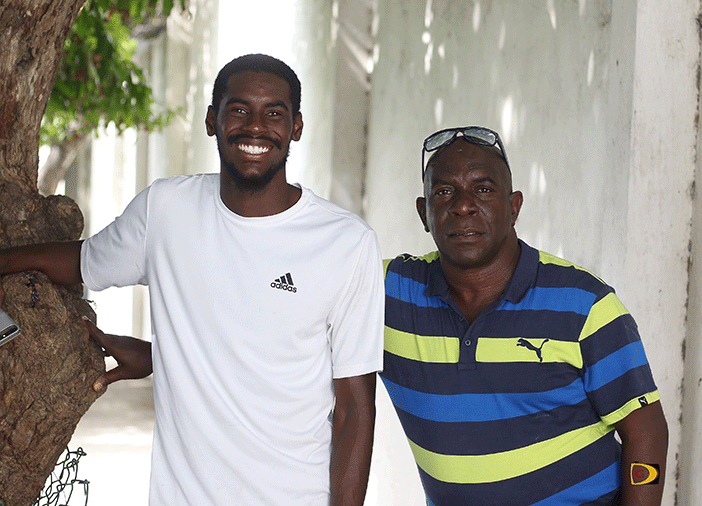 By Dean “The Sportsman” Greenaway

Over refreshments in the VIP lounge during the 2015 IAAF World Championships in Beijing, China between the 400m Hurdles semis, late Coach Dag Samuels began telling his regional colleagues that his athlete would start making an impact at the 2017 Worlds.

“But Dag, you don’t even have a hurdler,” one said, to which Samuels told him to wait and see. There was even more roaring laughter when Samuels said his hurdler would be contending for a medal in Tokyo 2020.

“Dag’s a good man,” another colleague said. “He just has a broad imagination. We all know he means well.”

Samuels, the Fast Lane Track Club founder, again reiterated his wait and see words, as he was mapping out a vision for the future.

McMaster advanced to the semis of the 2017 IAAF World Championships 400m Hurdles but was disqualified for a lane violation. Less than a week after they returned from winning the Diamond League final, Samuels sadly perished during Hurricane Irma, on Sept 6.

McMaster would later relocate and begin training with Lennox Graham in South Carolina, continuing Samuels’ vision. Graham has guided McMaster to victories in the 2018 Commonwealth Games, CAC Games, NACAC Championships and the IAAF Diamond League trophy—a repeat from 2017. He was 4th in the 2019 World Athletics Championships and 4th in the Tokyo Olympic Games.

“If you look at all my races, I still wear his armband. I always take him everywhere I go. I always feel he watches over me and helps me through the hard times,” McMaster, who became the No 8 All Time fastest 400m Hurdler in history with his 47.08 seconds in Tokyo, told Island Sun Sports. “It really feels good when I make a breakthrough or have a great achievement. I always feel that he’s there. He provided this gateway for me and making these breakthroughs and milestones is a way to honor his name and show my gratitude.”

McMaster said he has had several bands on his hand but there’s a blue one for some reason, has never been broken. He said even if he pulls on it with a shirt and didn’t realize, all the others break but not that one.

“I know he’s with me. He’s holding it together,” McMaster said. “This blue band is spiritual. I guarantee you that.”

Samuels didn’t believe in developing teenage stars and McMaster said they would sit and map out his progression. McMaster said he believed in Samuels Coaching abilities and they discussed times he’d run before he produced them.

“I remember when we went to the Florida Relays and he said ‘you’re going to run 48’ and I laughed as that was my first time running the 400m Hurdles on the professional stage,” McMaster reflected. “I was like, okay Coach, and he said ‘for true. Just go out there and do like we’ve been doing in training and you’ll run 48’ and boom, I ran 48. Afterwards he said, ‘didn’t I tell you, you were going to run 48?’ Later at the Tom Jones Invitational, he said ‘you’re going to run a faster 48.’ I laughed and said let’s see, and I did that.”

On their return home to resume training McMaster recalled Deya Erickson, Jeremey “Chicken” Penn, Tehymal “Dobby” Huggins, Nateshon “Shadow” Thomas among others, were playing dominoes ahead of his Jamaica Invitational competition. Everyone asked Samuels what time he’s going to run.

“I told you what he’s going to run yo’ know,” Samuels said.

“I went to Jamaica and ran 47.80 seconds and Coach was like, ‘I know what you were going to run,’” McMaster recalled. “It’s like he was seeing it. I don’t know. But from that moment I crossed the line and saw 47.80, that’s when I said, this man is on to something. Coming down to the last meet of the season, he said, ‘Look Kyron, if you stay honest to yourself and continue training hard and stay focused and don’t get sidetracked by girls or anything, you’re going to run 46 and you’re gonna be one of the best out there.”

“He said, ‘yeah and you’re going to break the World Record and will probably run 45,’ something he said. We were in Ostrava, last meet of the season. He said ‘you’re going to do it,’ and I started to laugh. After I saw Samba run 46.98, I was like dang. But I’m confident I’m going to get there to be honest.”

With his opponents Karsten Warholm running 45.94 and Rai Benjamin, 46.17, McMaster said they beat him to Samuel’s predicted time and made his job harder. He said it’s a task that he loves.

“I’m going to enjoy running against these guys for the next couple years because we’ll be pushing each other to the limit,” he said.

And Samuel will be there with him.