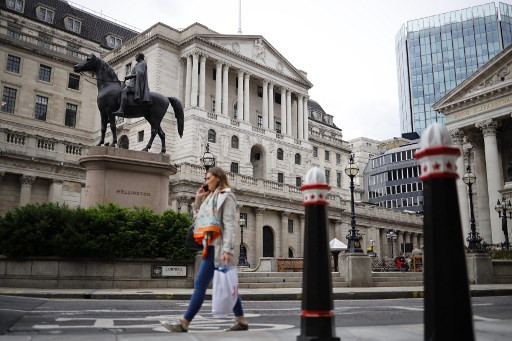 Two of the UK’s biggest institutions — the Church of England and the Bank of England — apologized Thursday for their historic links to slavery with the church calling it “a source of shame”.

The apologies, reported by the Telegraph newspaper, come after analysis of figures compiled by University College London (UCL) found that individual members of both institutions profited from slavery.

The UCL research found that nearly 100 clergymen and six governors plus four directors of the bank benefitted from slavery, reported the Telegraph.

In response, a Church of England spokesman told the newspaper: “While we recognize the leading role clergy and active members of the Church of England played in securing the abolition of slavery, it is a source of shame that others within the church actively perpetrated slavery and profited from it.”

A Bank of England spokesman said: “As an institution, the Bank was never itself directly involved in the slave trade, but is aware of some inexcusable connections involving former governors and directors and apologizes for them.”

The bank added it would remove any images on display of former executives who were involved with the slave trade.

The global explosion of the Black Lives Matter demonstrations, following the killing in the US of African-American George Floyd, has led to a reassessment in the UK of its central role in the slave trade.

Recent demonstrations in the southwestern city of Bristol saw the toppling of a memorial to the slave trader Edward Colston.

On Wednesday it was announced that Oxford University’s Oriel College had voted to take down a statue of colonialist Cecil Rhodes.

There has also been a backlash against attacks on statues with some demonstrators protecting memorials in parts of the country.

The UCL research is reportedly focusing on logging details of up to 47,000 people involved in the slave trade who received compensation totaling 20 million pounds — worth more than two billion pounds today — when slavery was abolished by the UK in 1833.

The Lloyd’s of London insurance market has also apologized for its “shameful” role in the 18th and 19th Century Atlantic slave trade and pledged to fund opportunities for black and ethnic minority groups.

“We are sorry for the role played by the Lloyd’s market in the 18th and 19th Century slave trade – an appalling and shameful period of English history, as well as our own,” Lloyd’s said in a statement on Thursday.

“Recent events have shone a spotlight on the inequality that black people have experienced over many years as a result of systematic and structural racism that has existed in many aspects of society and unleashed difficult conversations that were long overdue,” it added.

The world’s leading commercial insurance market, Lloyd’s – which started life in Edward Lloyd’s coffee house in 1688 – is where complex insurance contracts ranging from catastrophe to events cancellation are agreed and underwritten

Now while the apologies are unprecedented and welcomed, chairman of the Caribbean Reparations Commission, Prof. Sir Hilary Beckles said “saying sorry is not enough!”

Companies that benefited from slavery must go further than apologising, the chairman of the Caribbean Reparations Commission has said.

Many British and European firms and their predecessors “drank from the well of Caribbean slavery”, said Prof. Sir Hilary Beckles.

The comments came as several financial institutions apologised for their historical links to the slave trade.

He called on British firms to fund development projects in the Caribbean.

“Unfortunately, one cannot go back and remake the history but you can make atonement: it is not enough to make your apology as a public spectacle, it is not enough to present it as public relations exercise,” said Prof. Beckles, who is vice-chancellor of the University of the West Indies.

The historian added that British institutions should sit down with Caribbean nations to fund development projects. Alternatively, they could consider a type of “Marshall Plan” – a reference to the US aid given to Europe after World War Two.

“All the institutions that created this mess really have to come and help in practical ways to clean it up,” he said.