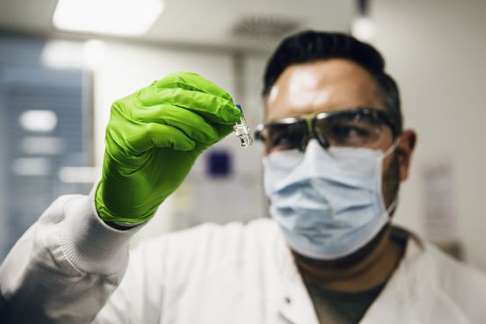 With Pfizer Inc.’s Covid-19 vaccine on track to be authorized as early as next month, Western governments are facing an enormous logistical challenge: getting enough people shots of new vaccines.

While previous vaccination programs have spread over years and focused on specific demographics such as children or the elderly, governments are hoping to do something they never have done before and inoculate a majority of the population in a matter of months.

Even for rich nations with developed vaccination programs, that presents a host of problems including building new databases to track who is getting the shot, working out ways to encourage mass uptake among younger people, ensuring adequate supply and running large-scale inoculation centers where the shots can be safely and quickly administered.

Those challenges mean that even if a vaccine is soon approved, it could be many months before it is administered to enough people to ease the need for lockdown measures that have been recently reimposed across the West.

If a vaccine arrives, “is it enough to say that life will resume as usual? I think the answer is no,” said David Salisbury, who previously chaired the World Health Organization’s Strategic Advisory Group of Experts on Immunization.

On Monday, Pfizer and its partner BioNTech SE said their Covid-19 vaccine proved more than 90% effective in protecting people from the virus in a study, raising hopes that it could—pending regulatory authorization—become the first of several vaccines that could stem the tide of the disease.

Already governments are mapping out how they intend to distribute such vaccines. Britain’s National Health Service has held test runs to see how a vaccine that has to be stored at an ultralow temperature could be administered to people en masse, ahead of a planned roll out to health workers as soon as next month.

The United Nations Children’s Fund has begun stockpiling half-a-billion syringes in preparation to distribute a vaccine globally. The European Union’s executive arm has drafted a plan on who to vaccinate, in what order, starting with health-care workers, then the elderly, the sick and then essential workers.

In the U.S., the federal government mapped out a multipronged approach, including working with state officials who will play a key role in administration of the shots. The U.S. government tapped McKesson Corp. to distribute future vaccines, except for the one from Pfizer, which is doing it on its own.

In Kalamazoo, Mich., Pfizer has turned a stretch of land the size of a football field into a staging ground outfitted with 350 large freezers, ready to take delivery of millions of doses of Covid-19 vaccine before they can be shipped around the world. From that site, and another in Puurs, Belgium, the pharmaceutical giant said it wants to deliver up to 100 million doses this year and another 1.3 billion in 2021.

In Europe, several drugmakers including Pfizer hope to apply in late November for conditional marketing authorization, the EU’s equivalent to the emergency-use provision allowed in the U.S. Once they do, the European Medicines Agency, which can give the go-ahead, expects to spend perhaps a month making its decision. Since October, the agency has started reviewing early results from the trials for at least three vaccines, including Pfizer’s.

Even if everything runs smoothly, there will likely be a long lag before a vaccine can make it to a large enough proportion of ordinary people to significantly slow transmission, say epidemiologists who worry governments are overly confident that life will rapidly get back to normal. The obstacles lie both in the bottlenecks inherent in producing hundreds of millions of doses of a new vaccine and in the logistics of delivering it to patients.

Much also depends on the vaccine itself. Even if an eventual vaccine is proved to trigger an immune reaction in 90% of those who receive it—as Pfizer said is suggested by the early results from its trial—that would require at least three-quarters of the population to have the shot for herd immunity to be acquired, said Roy Anderson, an epidemiologist and professor at Imperial College London. Herd immunity occurs when enough people develop an immune response through previous infection or a vaccine to curb the spread of the virus.

Even if uptake is good, Mr. Anderson estimates that further lockdowns will still be introduced early next year before normal life resumes in 2022.

If the vaccine’s effectiveness falls below the 80% level, then the whole population needs to be injected, he said. European regulators will green light a vaccine that is at least 50% effective.

“A little less conversation about a vaccine would not be a bad thing right now,” said Emma Hodcroft, a molecular epidemiologist at Switzerland’s University of Bern. “There’s a real disconnect between vaccine producers and the headlines that come out about a vaccine approved by Christmas. A little bit more realism about the time frame for vaccinating the population would be helpful.”

The vaccine makers themselves are still working out some of the specifics of how a vaccine could be produced at scale, stored and transported.

Switzerland’s Lonza Group AG, which hopes to make 400 million doses of Moderna Inc.’s vaccine next year, expects the vaccine will need to be kept at minus-70 degrees Celsius until it can reach a factory where it will be packaged into vials.

From there, the vaccine will hopefully be able to survive for at least a year at minus-20 degrees, which most Western hospitals have equipment to handle. But the company is still fine-tuning the production process to make sure it can manufacture enormous quantities of the vaccine without the vaccine losing its quality.

“It can be everything, temperature, timing, raw materials, stability, fermentation, production of the nanoparticles,” said Albert Baehny, chairman of the board of directors at Lonza.

AstraZeneca PLC, which is also working on a vaccine, doesn’t have enough history with it to know the shelf life, so has held back packing bulk-volume vaccine substance into vials for distribution, executives said last week.

Some of these vaccines require two separate injections to be effective, creating a logistical challenge for governments.

Mass vaccination can, in theory, happen very quickly. In the early 2000s, the British government created a contingency plan to vaccinate the whole of the country in the space of a week.

A Covid shot could be administered much like the annual flu vaccine is across the developed world, experts say. Doctors estimate it would take just a few minutes longer than a normal flu vaccine to put into people’s arms. Britain, for instance, has changed laws so that student doctors and physiotherapists can administer the shot.

If targeted at those who are most vulnerable to the disease, such as people over 70, it could cut pressure on health services and thus the need for lockdown. This combined with better treatments and more effective testing could ease the need for social distancing. But to ensure wider uptake, governments should consider mandating people to get the vaccine, much like in many U.S. states where children need immunizations to enroll at school, said Mr. Anderson.

Given mass vaccination drives are hard to pull off, some epidemiologists warn that the disease may linger in the population for decades to come. Europe, for instance, wasn’t declared polio-free until 2002.

“We’re realistically talking about the middle of next year before there is any significant uptake,” said Martin McKee, professor of European public health at the London School of Hygiene and Tropical Medicine.