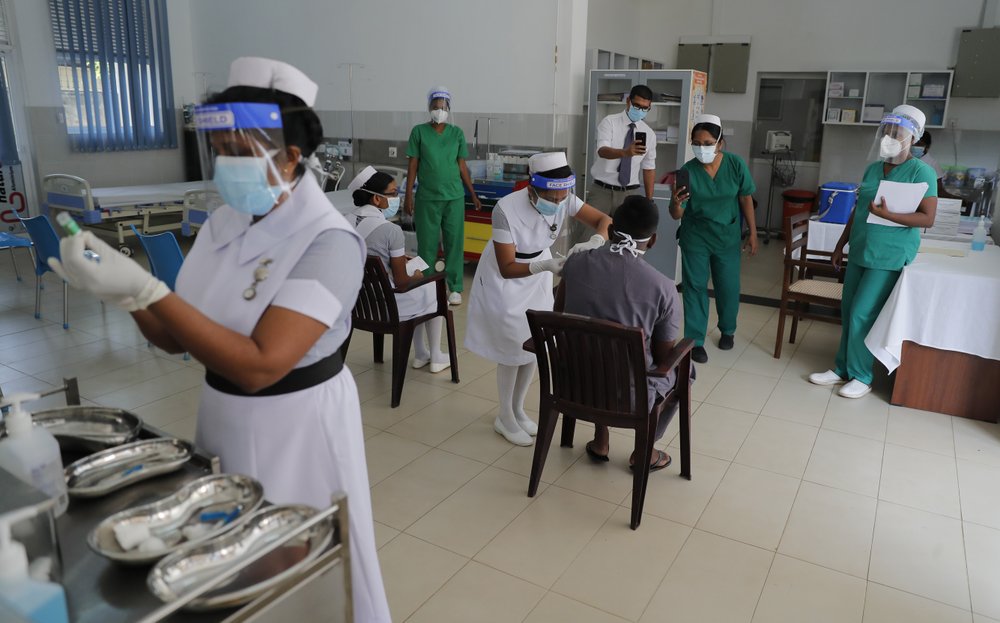 NEW DELHI (AP) — With coronavirus cases still climbing, Honduras got tired of waiting to get vaccines through a United Nations program, so the small Central American country struck out on its own, securing the shots through a private deal.

Honduras “cannot wait on bureaucratic processes or misguided decisions” to give citizens “the peace of mind” offered by the COVID-19 vaccine, said Juan Carlos Sikaffy, president of the Honduran Private Business Council, which helped complete the purchase by providing a bank guarantee.

Other nations are getting impatient too. Unlike past disease outbreaks, where less wealthy countries have generally waited for vaccines to be delivered by the U.N. and other organizations, many are now taking matters into their own hands. Experts are increasingly concerned that these go-it-alone efforts could undermine a U.N.-backed program to get COVID-19 shots to the neediest people worldwide.

Countries including Serbia, Bangladesh and Mexico recently began vaccinating citizens through donations or commercial deals — an approach that could leave even fewer vaccines for the program known as COVAX, since rich countries have already snapped up the majority of this year’s supply.

Boxes of COVID-19 vaccines arrive in Dhaka, Bangladesh. (High Commission of India in Bangladesh via AP)

Led by the World Health Organization, a coalition for epidemic preparedness known as CEPI and a vaccine alliance called GAVI, COVAX was created to distribute COVID-19 vaccines fairly. Countries can join either to buy vaccines or to get donated shots.

Mustaqeem De Gama, a diplomat at the South African mission in Geneva, cited “a level of desperation” fueled by spreading virus variants and “the uncertainty of when any COVAX vaccines might arrive.” He doubted that countries that signed up for COVAX “will even get 10% of what they require.”

Even if the effort succeeds, COVAX’s stated goal is to vaccinate less than 30% of people in poor countries, meaning that governments must seek other sources to obtain enough shots to achieve herd immunity.

Serbian President Aleksandar Vucic said his country was forced to cut its own deals after watching rich countries scramble for the scarce shots. He criticized nations that, he said, bought more doses than they needed.

“It’s as if they intend to vaccinate all their cats and dogs,” he said.

Although Serbia paid 4 million euros to COVAX last year, it has not yet received any shots and last month began its immunization campaign with vaccines from Pfizer, China’s Sinopharm and Russia.

Recent manufacturing delays in Europe raise concerns about whether drugmakers will be able to fulfill the multiplying orders.

“There are so many deals being signed that I think it’s hard to see how the numbers could possibly add up for all the doses ordered to actually be produced in the foreseeable future,” said Amanda Glassman, a public health expert and executive vice-president of the Center for Global Development.

Some experts warn that these new deals could move COVAX further to the back of the line, especially if some countries are willing to pay a premium for speed.

To ensure South Africans got doses of the AstraZeneca vaccine quickly, government officials reluctantly agreed to pay a higher price per shot than Europe or North America. The first shipments arrived this week.

COVAX hopes to start sending its first vaccine batches to Africa later this month, but those plans are subject to change depending on manufacturers’ production capacities and countries’ immunization plans.

Mexico began vaccinating health workers in December because of a direct purchase agreement with Pfizer. In recent weeks, the country has been forced to turn to Russia’s Sputnik V vaccine, which was expected to arrive next week, even though it has not been approved by Mexican regulators.

Health workers and soldiers stand in line for the Pfizer-BioNTech vaccine for COVID-19 at the N-1 military base in Mexico City. (AP Photo/Marco Ugarte, File)

Kate Elder, senior vaccines policy adviser at Doctors Without Borders, said developing countries should not be criticized for securing private vaccine deals since that is precisely what rich countries did last year.

“Every country is just doing what it feels it needs to do to protect their people,” she said, but the ability of poor countries and regions to get vaccine faster than COVAX could hurt future U.N. efforts.

“If countries are getting vaccines on their own, then how are WHO and GAVI delivering for them?” she asked.

Although India is contracted to provide COVAX with several hundred million doses of vaccine, the shots have not yet been authorized by the WHO, meaning India cannot release them for the U.N. program. In the meantime, India has already gifted neighbors, including Sri Lanka, Bangladesh and Nepal, with more than 5 million doses.

Dr. Haritha Aluthge of Sri Lanka’s Government Medical Officers’ Association, called for the WHO to intervene amid the intense competition for vaccines and the failure of COVAX to deliver.

“Not a single dose (from COVAX) has been received,” Aluthge said.

WHO chief Tedros Adhanom Ghebreyesus warned recently that the world is on the brink of a “catastrophic moral failure” if COVID-19 vaccines are not distributed fairly, but the agency has no authority to force rich countries to share.

Its entreaties for countries to act in solidarity have mostly been ignored.

Norway is the only country that said it would send vaccines to developing countries as its own citizens are immunized, but it has not specified how many would be donated. Britain said it would not divert any vaccines until it finishes its own immunization program. Australia, which has mostly stamped out COVID-19, has no timeline for when it might share vaccines with its poorer neighbors in southeast Asia and the Pacific islands.

The unrelenting pressure on the world’s vaccine supplies might only lift when more shots prove successful, said Krishna Udayakumar, director of the Duke Global Health Institute.

“COVAX is the only global, multilateral platform to enable something close to global access and equity, and yet, it has access to a relatively small amount of vaccines,” he said. “The only way out is to have more vaccines.”