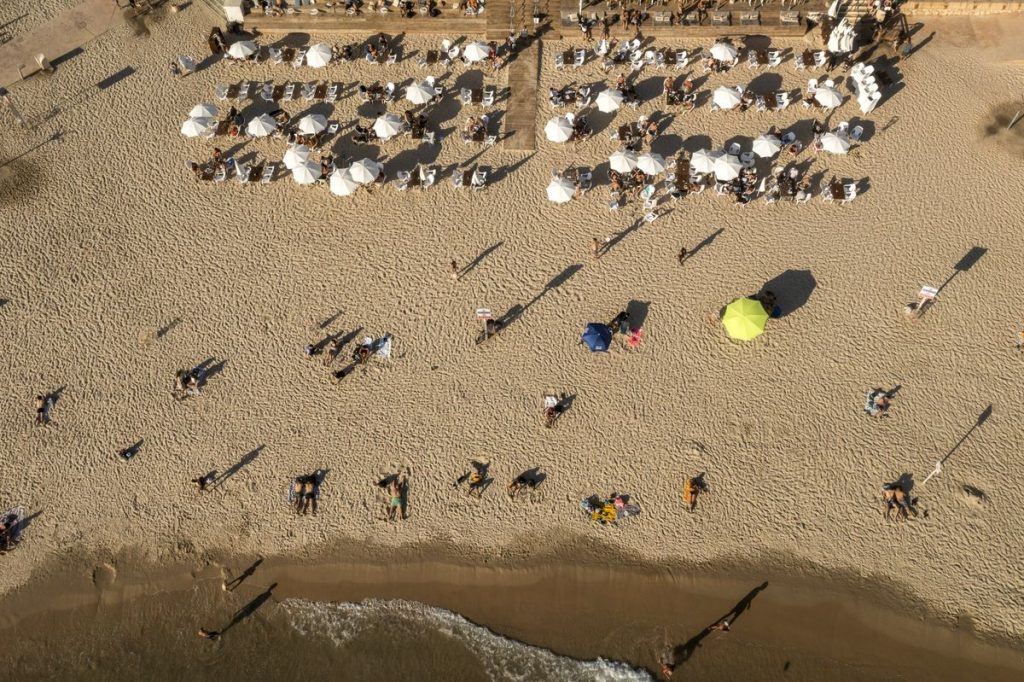 Almost a year and a half into the pandemic, the best and worst places to be in the Covid-19 era are increasingly defined by one thing: normalization.

The biggest vaccination drive in history is enabling parts of the globe to abolish mask mandates, relax restrictions and dismantle border curbs, making the magnitude of reopening key to quality of life. Taming cases and deaths was once paramount, along with ensuring a robust health-care system. Now, the ability to essentially turn back the clock and return to pre-pandemic times is taking on an even greater significance.

Central to that is an economy’s openness to the world, and that’s why we’ve introduced a new element—Reopening Progress—to Bloomberg’s Covid Resilience Ranking. Two new metrics capture the ease of moving in and out of a place and how much air travel has recovered, alongside our 10 other measures tracking mortality rates to infection counts, freedom of movement to economic growth.

This pivot has ushered in dramatic changes to the ranks. The U.S. is now No. 1, with its fast and expansive vaccine rollout, dominated by the highly effective Messenger RNA shots, stemming what was once the world’s worst outbreak.

Restaurants are packed, masks are no longer required for vaccinated people and Americans are going on vacation again, emboldened by a vaccination rate that covers half of the population. The U.S. is set for blistering economic growth this year thanks to a $1.9 trillion stimulus package and inoculation-fueled consumer confidence.

Because of the shift in the Ranking’s focus, we’re not comparing directly with last month. Some key takeaways, though:

While the failure of powerful, developed economies to curb the spread of the coronavirus remains a lasting legacy of the pandemic and leaves a deep scar—the U.S., U.K. and parts of Europe have some of the highest mortality-per-capita rates in the world—these places are proving faster and better at exiting the Covid era, mostly thanks to domination of vaccine supplies.

In contrast, the Asia-Pacific economies that have populated the top rungs of the Ranking since its debut in November have seen their fortunes fade.

“Covid havens” like No. 2-ranked New Zealand and No. 13-ranked Singapore use border curbs and lengthy quarantines to keep case levels near zero. While life internally has largely returned to normal, they remain shut to the outside world with even a handful of cases triggering the sorts of restrictions highly vaccinated places are abandoning. Sydney was put into a two-week lockdown following the detection of dozens of locally-transmitted infections, and Australians haven’t been allowed to leave the country since March last year.

As others accept that Covid is endemic and move on, these places are at risk of being stuck in cycles of lockdowns, a particular blow for smaller travel-reliant economies. Still, all but quashing Covid and the internal freedoms that affords has kept places like New Zealand, Australia and China in the top 10.

The Covid Resilience Ranking captures a snapshot in time. There’s no guarantee that the turnarounds pulled off by the U.S. and Europe will hold as outbreaks in the developing world continue to throw up fearsome mutations. Due to the spread of the delta variant, the U.K. has delayed reopening plans for a month while Israel, ranked No. 4 thanks to its enviable vaccination rate, has reinstated indoor mask mandates.

While parts of the developed world are awash with vaccines, supplies are tight and in some cases non-existent in swathes of Latin America, Africa and Southeast Asia. With infections continuing to flare, restrictions still in place and faltering vaccination rollouts, Argentina is ranked last of the 53 economies, and the Philippines, Malaysia and India round out the bottom four.

Is the light at the end of the Covid tunnel an ephemeral one, or can more and more economies leave the pandemic behind? That will be the focus of the Ranking as we move into July.

To capture which of the 53 economies are reopening best, we zeroed in on their progress on vaccination, lockdown severity, plus the two new metrics tracking travel. Flight Capacity calculates the number of plane seats in the past four weeks versus the same period in 2019, while Vaccinated Travel Routes—derived from a database maintained by travel data provider Sherpa—reflects freedom of movement for inoculated people around the world.

In fourth-placed Israel, where enough shots have been administered to cover nearly 60% of the population, live theater and sporting events are back on with Covid-19 deaths down to a few a week, compared to a peak of more than 400. But a surge in infections linked to the highly transmissible delta variant has delayed the reopening of its borders to foreign tourists.

In the U.K., which ranks 9th, pubs are busy and people can go on foreign holidays to some destinations on the “green list,” though further easing has also been postponed by the delta variant.

Member states of the European Union—where enough shots have been given for 40% of the population—are the fastest in adopting quarantine-free entry for inoculated travelers: Romania, Switzerland and Spain are the most connected to the world according to the new Vaccinated Travel Routes indicator.

Economies that have largely kept their borders open throughout the pandemic like Egypt and Mexico also score high in this metric, though some other places bar their travelers from entering given bad outbreaks and low vaccination in these countries.

The Asia-Pacific, which has relied on shutting out the world to snuff out Covid-19—delivering vastly lower mortality rates—scores poorly on reopening. Border closures and onerous travel quarantine requirements help keep the virus at bay, but leave them increasingly isolated. No Covid-19 has led to a lack of vaccine urgency in some places, with both New Zealand and Australia administering doses to cover less than 15% of their populations.

While China’s international borders are effectively closed, it scores highly on flight capacity, because the data—provided by aviation data specialist OAG—rewards larger economies where local flights have made up for the absence of global travel. Conversely, small, travel-reliant economies like Hong Kong and Singapore, which don’t have domestic air travel markets, score among the worst.

It’s in vaccination where places like the U.S. and U.K. have made up for lost ground, rising rapidly in the Covid Resilience Ranking as investment in research and a focus on fast rollouts proves pivotal. The U.S.’s Operation Warp Speed saw some $18 billion plowed into developing the first Covid-19 vaccines.

Economies that moved early on shots have the advantage of being mostly—and in Israel’s case, entirely—inoculated with mRNA vaccines, which appear to not just prevent a person from developing Covid, but from contracting and transmitting it as well. While the evidence is still early, vaccines that rely on more traditional technology don’t appear to do this to the same degree, though they’re proving effective in stopping people from getting critically ill and dying from the virus.

In places where the majority are inoculated, the link between infection numbers and deaths appears to be weakening, and policymakers are reframing the way they view Covid-19 cases.

Meanwhile, most of the developing world is yet to even start inoculating in a significant way, lacking the purchasing power to forge deals that put them at the front of the queue. Covax, the WHO-backed effort to help poorer countries procure doses, only started distributing shots at the end of February and is facing a supply shortfall that’s seen many places run out of vaccines entirely.

“The global failure to share vaccines equitably is fueling a two-track pandemic that is now taking its toll on some of the world’s poorest and most vulnerable people,” said the WHO’s Tedros earlier this month.

Disparities in immunity pose a threat to the world: the more the coronavirus spreads unchecked, the more opportunity there is for dangerous new mutations to develop. The chance of a new strain entering a vaccinated place and igniting a new wave can’t be discounted. Leaders in western economies that have reopened like the U.S. are warning their unvaccinated people that they’re vulnerable to the fast-spreading delta variant.

The growing crisis in the developing world is putting pressure on advanced economies to do more to help. Images of Americans in joyful social reunions are juxtaposed with crowds in India jostling for any vaccine dose.

In June, Group of Seven leaders, including U.S. President Joe Biden and U.K. Prime Minister Boris Johnson, pledged to donate hundreds of millions of doses, but developing countries need billions of shots. China is filling some of that gap, rolling out its homegrown vaccines via mostly bilateral deals with places like Brazil, Indonesia and Chile.

The underperformance of some of the world’s most prominent democracies in containing the coronavirus, contrasted with the success of authoritarian countries like China, has raised questions over whether democratic societies are cut out for tackling pandemics.

Bloomberg’s Covid Resilience Ranking tells a different story: democracies have made up the majority of our top 10 since the measure’s debut in November. Success in containing Covid with the least disruption appears to rely less on being able to order people into submission and more on governments fostering a high degree of trust and societal compliance.

When citizens have faith in the authorities and their guidance, lockdowns may not be needed at all, as Japan and South Korea showed through most of 2020, though fierce winter waves definitely challenged those more open approaches.

Now No. 2 after losing the pole position to the U.S., New Zealand emphasized communication from the start, with a four-level alert system that gives people a clear picture of how and why the government acted as the outbreak evolved.

Investment in public health infrastructure also matters. Undervalued in many places before 2020, systems for contact tracing, effective testing and health education bolstered the places that have performed consistently well in the Ranking, helping socialize hand-washing and the wearing of face masks. This has been key to avoiding economically crippling lockdowns in the first year of the pandemic, before vaccines were available.

Though wealthy nations that bet on vaccination are now seeing the strategy pay off, their failure to check the coronavirus through public health measures leaves a deep scar, with more than 600,000 people dead from Covid-19 in the U.S. and some survivors grappling with debilitating after-effects.

Bloomberg’s Covid Resilience Ranking provides a glimpse of how the pandemic is playing out in 53 major economies right now. By pivoting more toward opening up and the revival of global travel, we also provide a window into how these economies’ fortunes may shift in the future as places exit the pandemic at different speeds.

It’s not a final verdict—it never could be, given the imperfections in virus and vaccine data and the fast pace of this crisis. Circumstance and pure luck also play a role, but are hard to quantify.

New variants of concern, which will continue to emerge as outbreaks rage in the developing world, are also a wild card: scientists fear mutations that can overcome existing vaccination and drive a new phase of the pandemic.

Still, having endured a year and half of fighting Covid-19, governments and populations now have a better understanding of the pathogen, how to mitigate the damage it inflicts, and how to develop inoculations against its various strains.

And even as some parts of the world now enjoy the return of summer travel, a crucial winter awaits.

“Winter in the northern hemisphere will be the real next big test to see how effective high levels of vaccination have been,” said Peter Collignon, a professor of infectious diseases at the Australian National University Medical School in Canberra.

As the data shift, the Ranking will change too—we’ll continue to update the picture every month, as it evolves.

By Jinshan Hong, Rachel Chang and Kevin Varley of Bloomberg