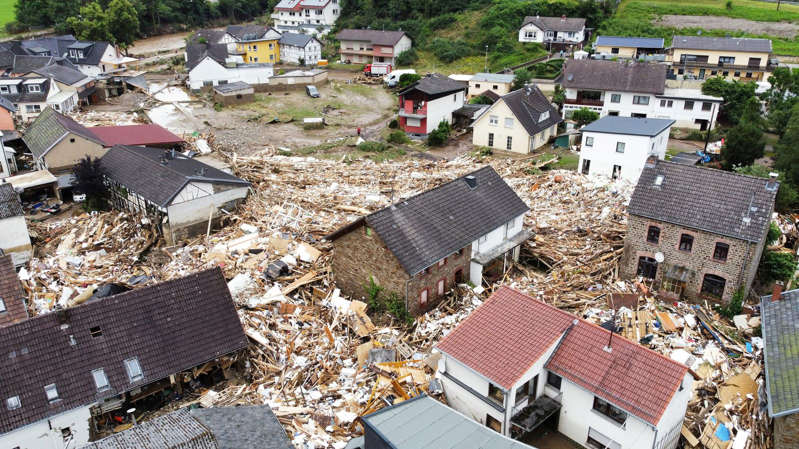 More than 120 people have been killed and hundreds more are missing after catastrophic flooding across Germany and Belgium, which has left several villages cut off and sparked fears that a dam could burst.

Officials have warned communities in both countries “are still in danger” following Thursday’s catastrophe, with German Chancellor Angela Merkel expecting “many” more deaths amid further rainstorm warnings for Friday.

The total number killed in Germany alone has risen to at least 103, according to Reuters news agency, citing officials, with communities across the North Rhine-Westphalia and Rhineland-Palatinate states affected.

More than 150 litres of rainwater per square metre fell over 24 hours in parts of western Germany, causing rivers to swell and burst their banks.

Among the worst-hit areas is Ahrweiler county, south of Cologne, where several homes collapsed in the village of Schuld and authorities say around 1,300 people are unaccounted for.

Belgium has declared a national day of mourning for next week as the number of deaths there rose to 20, with another 20 people missing.

Prime Minister Alexander De Croo told a news conference: “What should have been beautiful summer days suddenly turned into dark and extremely sad days for our fellow citizens.

“These are exceptional circumstances that our country has not seen before.”

People living in the south and east of the country have been told to avoid all travel.

“The waters are rising more and more. It’s scary,” Thierry Bourgeois, 52, said in the Belgian town of Liege.

Footage has shown properties on fire in Liege as floodwater fills the streets.

Thousands of people remain homeless after their houses were destroyed or deemed at-risk by officials.

The search for survivors continues and to help those trapped in houses at risk of collapse.

Around 900 German troops have been deployed to help the rescue and clean-up efforts.

The soldiers have been joined in their efforts by police helicopters, as they work to save people who have been left stranded by the high waters.

Some buildings have been reduced to rubble as old brick and timber houses couldn’t withstand the flash floods.

In the town of Erftstadt, southwest of Cologne, aerial pictures showed what appeared to be a massive sinkhole.

Karl-Heinz Grimm, who had come to help his parents in Schuld, said he had never seen the Ahr river surge in such a deadly torrent. “It was like madness,” he said.

“It was terrible not to be able to help people. They were waving at us from windows. Houses were collapsing to the left and right of them and in the house between they were waving. We were lucky, we survived,” said Frank Thel, a resident.

Earlier today, the freak floods brought down several houses in Erfstadt in North Rhine-Westphalia and rescuers were struggling to help families who had returned to their homes despite the warnings, Cologne district government officials said on Facebook.

Authorities in Rhine-Sieg county, south of Cologne, ordered the evacuation of several villages below the Steinbach reservoir amid fears the dam there could break.

One dam close to the Belgium border, the Rurtalsperre, was flooded overnight while another, the Steinbachtalsperre, has been stabilised.

The deluge of rain and flooding has disrupted rail, road and river transport, with shipping suspended on the Rhine river.

The full extent of the damage in the regions affected remains unclear as many remote areas remain cut off by floodwater and landslides that have made roads impassable, hampering rescue operations.

Some 114,000 properties in western Germany and 20,000 in the southern Belgium are without power.

Mobile phone networks and internet connections are also down in flood-stricken regions, leaving family and friends unable to contact their loved ones.

“I grieve for those who have lost their lives in this disaster,” said Ms Merkel, who has promised help for communities.

“We still don’t know the number, but it will be many. The full extent of this tragedy will only be seen in the coming days.”

German President Frank-Walter Steinmeier said he was “stunned” by the devastation and also pledged support to the families of those killed and to cities and towns facing significant damage.

“In the hour of need, our country stands together,” he said. “It’s important that we show solidarity for those from whom the flood has taken everything.”

The governor of Rhineland-Palatinate state, Malu Dreyer, said the “suffering just keeps increasing”, adding that more than 50 people have died in her state alone.

“We have never seen such a disaster. It’s really devastating.

In Belgium, around 10 houses collapsed in Pepinster after the river Vesdre flooded the eastern Belgian town and residents were evacuated from more than 1,000 homes.

People living near the Meuse river in Liege, a city of 200,000, have been urged to move to higher ground, while traffic on the major waterway has been suspended as it threatens to breach its banks.

The heavy rainfall, which has been described as unprecedented by experts, has extended into France, Luxembourg and the Netherlands too, while parts of Switzerland are on alert.

In the southern Dutch province of Limburg, troops piled sandbags to strengthen a long stretch of the embankment along the Maas river and police helped evacuate some low-lying neighbourhoods.

Families were ordered to leave their homes in and around the southern Dutch town of Meerssen, with an online alert saying: “Immediately leave your home and get to safety. There is a large hole in the dyke.”

European Commission chief Ursula von der Leyen said of the flooding across western Europe: “It is the intensity and the length of the events that science tells us this is a clear indication of climate change and that this is something that really, really shows the urgency to act.

German officials have also blamed climate change for the disaster, with Armin Laschet, premier of North Rhine-Westphalia, saying of the extreme weather: “We will be faced with such events over and over, and that means we need to speed up climate protection measures, on European, federal and global levels, because climate change isn’t confined to one state.”

Ms Dreyer told the Funke media group: “We’ve experienced droughts, heavy rain and flooding events several years in a row, including in our state. Climate change isn’t abstract anymore. We are experiencing it up close and painfully.”

Asked if the extreme weather in mainland Europe and global warming were linked, Myles Allen, Professor of geosystem science at the University of Oxford and a co-author of the UN’s report on climate change, told Sky News: “A warmer atmosphere holds more moisture, so precisely this kind of very intense summer rainfall event is exactly the kind of extreme event that we’d expect to be becoming already more frequent under climate change.

“So yes, I think we are seeing the weather dice being loaded in favour of this kind of event. As the world becomes warmer these weather events become more likely…The sooner we stop the warming, the better.

“We could stop this warming, we could turn it around within a generation if we wanted to, but emissions are still going up. So people are making lots of good promises, but what we are not seeing is that is followed up with action.”

Dr Michal Nachmany, chief executive of Climate Policy Radar, added: “You’d thought we’d be smart by now. You’d thought we’d wise-up. We have flooding across Germany, we are going into a heatwave in the UK, and we’ve just seen record temperatures across North America.

“And this is the mildest and the most polite that climate change will be to us. It is only going to get worse.”