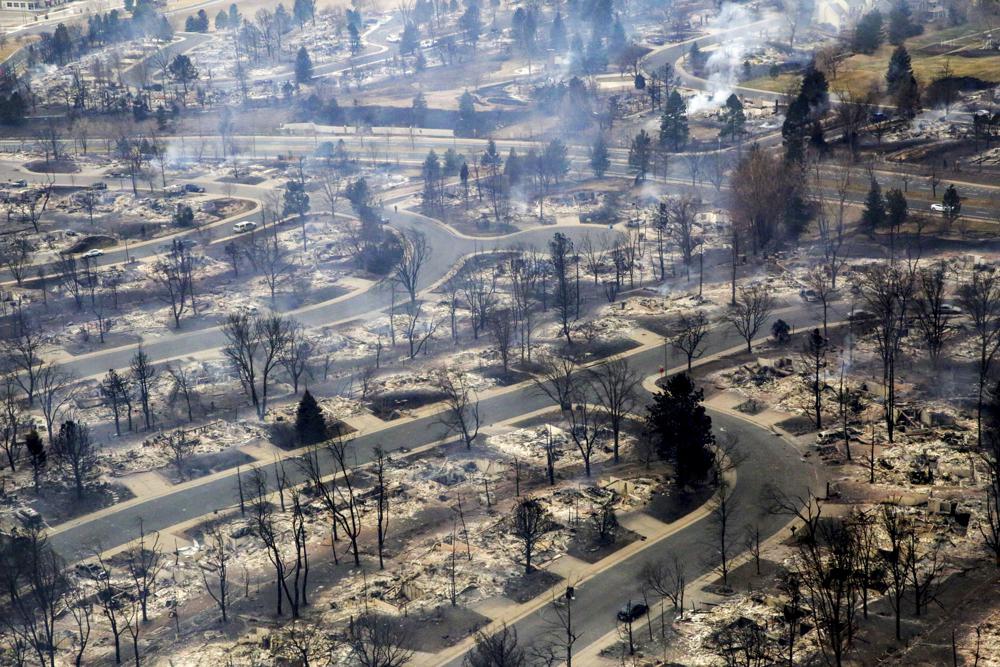 SUPERIOR, Colo. (AP) — One couple returned home Friday to find the mailbox about the only thing left standing. Charred cars and a burned trampoline lay outside smoldering houses. On some blocks, homes reduced to smoking ruins stood next to ones all but unscathed by the flames.

Colorado residents driven from their neighborhoods by a terrifying, wind-whipped wildfire got their first, heartbreaking look at the damage the morning after, while others could only wait and wonder whether their homes were among the more than 500 feared destroyed.

At least seven people were injured, but remarkably there were no immediate reports of any deaths or anyone missing in the aftermath of the blaze outside Denver.

Cathy Glaab found her home in the town of Superior where she lives with her husband had been turned into a pile of charred and twisted debris. It was one of seven houses in a row that burned to the ground.

“The mailbox is standing,” Glaab said, trying to crack a smile through tears. She added sadly, “So many memories.”

Despite the devastation, she said they intend to rebuild the house they have had since 1998. They love that the land backs up to a natural space, and they have a view of the mountains from the back.

The wildfire erupted Thursday in and around Louisville and Superior, neighboring towns about 20 miles (32 kilometers) northwest of Denver with a combined population of 34,000.

Tens of thousands were ordered to flee as the flames, propelled by gusts up to 105 mph (169 kph), swept over drought-stricken neighborhoods with alarming speed.

The cause of the blaze was under investigation. Emergency authorities said utility officials found no downed power lines around where the fire broke out.

On the day after, David Marks stood on a hillside overlooking Superior with others, using a borrowed pair of binoculars and a long camera lens to see if his house, and those of his neighbors, were still there.

He said he thinks his home is OK, but he won’t know for sure until police let residents back in. Marks said at least three friends lost their homes.

He had watched from the hillside as the neighborhood burned.

“By the time I got up here, the houses were completely engulfed,” he said. “I mean, it happened so quickly. I’ve never seen anything like that. … Just house after house, fences, just stuff flying through the air, just caught on fire.”

By first light Friday, the towering flames that had lit up the night sky had subsided and the winds had died down. Light snow soon began to fall, raising hopes it could snuff out hot spots.

By late morning, the blaze had burned at least 9.4 square miles (24 square kilometers) but was no longer considered an immediate threat.

“We might have our very own New Year’s miracle on our hands if it holds up that there was no loss of life,” Gov. Jared Polis said, noting that many people had just minutes to evacuate.

The wildfire broke out unusually late in the year, following an extremely dry fall and amid a winter nearly devoid of snow so far.

Boulder County Sheriff Joe Pelle said more than 500 homes were probably destroyed. He and the governor said as many as 1,000 homes might have been lost, though that won’t be known until crews can assess the damage.

“It’s unbelievable when you look at the devastation that we don’t have a list of 100 missing persons,” the sheriff said.

The sheriff said some communities were reduced to just “smoking holes in the ground.” He urged residents to wait for the all-clear to go back, warning that it was still too dangerous in many neighborhoods because of fire and fallen power lines.

Sarah Owens, her husband, adult son and their dog got out of their Superior home within 10 minutes of learning about the evacuation from a Facebook post. But as everyone tried leaving by way of the winding streets of the well-to-do Rock Creek neighborhood, it took them 1 ½ hours to go 2 miles (3.2 kilometers).

Once they safely found their way to a pet-friendly hotel, their cellphones and computers could not provide them with the only thing they wanted to know: Was their house still standing?

“The good news is I think our house may be OK,” Owens said.

But from now on, she said, she plans to have a bag packed in case of another fire.

“I never thought a brush fire could cause this kind of destruction,” Owens said. “I want to stay here. No matter where you live, there are always going to be natural disasters.”

Mike Guanella and his family were relaxing at their home in Superior and looking forward to celebrating a belated Christmas when reports of a nearby grass fire quickly gave way to an order to leave immediately.

Instead of opening presents, Guanella and his wife, their three children and three dogs were staying a friend’s house in Denver, hoping that the firefighter friend who told them their house was still standing was right.

“Those presents are still under the tree right now — we hope,” he said.

Sophia Verucchi and her partner, Tony Victor, returned to their apartment in Broomfield, on the edge of Superior, to find that it was spared any serious damage. They had fled the previous afternoon with just Victor’s guitar, bedding and their cat, Senor Gato Blanco.

“We left thinking it was a joke. We just felt like we were going to come back. At 5 o’clock, we thought, maybe we’re not coming back,” Verucchi said. But they got an email in the morning saying it was OK to return.

“Seeing the news and seeing all the houses burnt, we just feel very lucky,” Verucchi said.

The two towns are filled with middle- and upper-middle-class subdivisions with shopping centers, parks and schools. The area is between Denver and Boulder, home to the University of Colorado.

Ninety percent of Boulder County is in severe or extreme drought, and it hasn’t seen substantial rainfall since mid-summer. Denver set a record for consecutive days without snow before it got a small storm on Dec. 10, its last snowfall before the wildfires broke out.