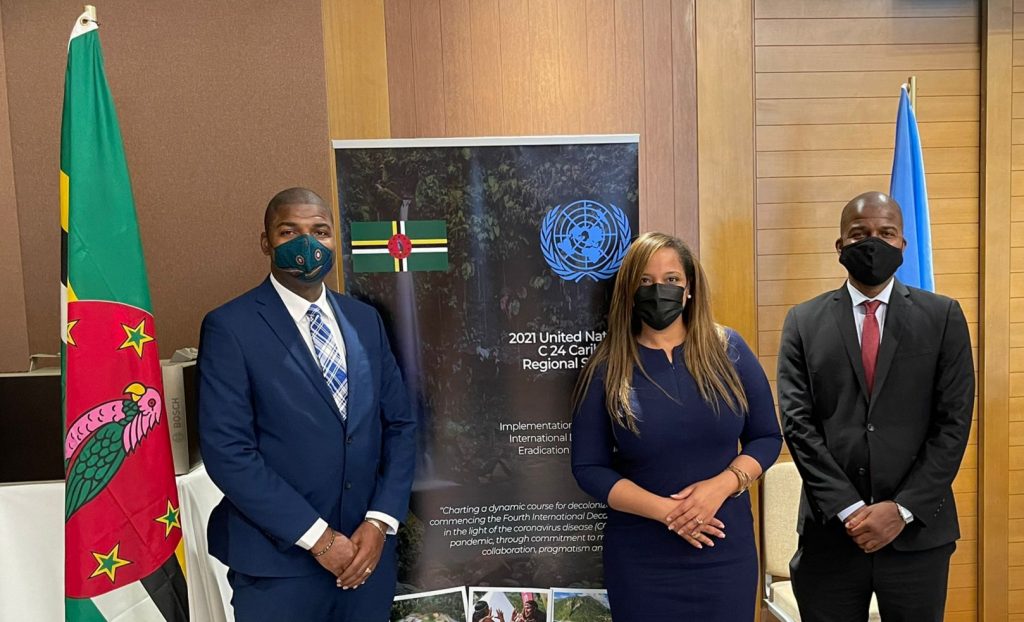 Deputy Premier Dr. Hon. Natalio Wheatley has welcomed the conclusions and recommendations of the United Nations (UN) Committee of 24’s (C-24) regional seminar on decolonization held in Saint John Parish, Dominica from 25th – 27th August 2021, which he attended on behalf of Premier and Minister of Finance Hon. Andrew A. Fahie.
According to Hon. Wheatley, “The UN via the C-24 has again reaffirmed the right of the people of the British Virgin Islands to self-determination and for self-governance in the Territory to be upheld. They have clearly called on the Administering Power, the United Kingdom (UK), to respect the UN Charter and international law which covers the special rights of the BVI and those societies on the UN list of Territories yet to be completely decolonized. This is includes the BVI’s current constitutional position and plans for Constitutional Review.”
In his report to the committee on the progress of decolonization and self-determination in the BVI, the Deputy Premier highlighted concerns about the prospect of the Territory’s autonomy being taken away following the completion of the ongoing Commission of Inquiry on the islands, despite the full cooperation of the elected Government.
“The sitting Government continues to cooperate with the Commission of Inquiry and is only seeking a just outcome. The process should not be used as a pretext by the UK to take away the autonomy of the local Government or as leverage to compel us to simply do as they wish, as opposed to engaging in dialogue. Moreover, the sitting Government should be allowed to exercise the maximum degree of self- governance permitted under the constitution. We are within our rights to do so,” Hon. Wheatley said.
He went on to say, “Furthermore, our plans for a Constitutional Review should not be impeded by the UK on the basis that they want to wait for the outcome of the Commission of Inquiry. The two things are mutually exclusive, and the UK should not be planning to capitalise on the Review as an opportunity to impose on us what they wish or to circumscribe the powers of the local Government. Rather, the aspirations of the Government and people of the British Virgin Islands should be the basis for any constitutional changes, which should proceed without delay.“

In light of the concerns expressed by the Deputy Premier and other representatives of the Overseas Territories which the UN says have yet to be decolonized, the C-24 agreed their conclusions and recommendations of the regional seminar. Among other things, the C-24:
• Reaffirmed, in accordance with the Charter of the United Nations and other relevant international law, that all peoples have the right to self-determination and, by virtue of that right, to freely determine their political status and freely pursue their economic, social and cultural development;
• Also reaffirmed that any attempt aimed at the partial or total disruption of the national unity and the territorial integrity of a country is incompatible with the purposes and principles of the Charter of the United Nations;
• Reconfirmed that the United Nations had a valid ongoing role in the process of decolonization, that the mandate of the Special Committee was a major programme of the Organization and that United Nations support should be provided until all outstanding decolonization issues and related follow-up matters have been resolved in a satisfactory manner, in accordance with the relevant United Nations resolutions and decisions;
• Reaffirmed the role of the Special Committee as the primary vehicle for fostering the process of decolonization and for monitoring the situation in the Territories;
• On the status-related and/or constitutional review exercises and the overall process of decolonization, stressed that such processes should be approached on a case-by-case basis and in a way that was respectful of human rights, transparent, accountable, inclusive and participatory, with the involvement of the people concerned, in accordance with the relevant United Nations resolutions and decisions on decolonization and the purposes and principles of the Charter of the United Nations;
• On the relationship with administering Powers, advised that interactions and cooperation between the Special Committee and the administering Powers should continue to be nurtured and strengthened through various possible platforms and means, including informal working-level dialogue, and reaffirmed that all administering Powers, particularly those that had not done so, needed to engage effectively in the work of the Committee;
The theme of the 2021 C-24 regional seminar on decolonization was “Implementation of the Fourth International Decade for the Eradication of Colonialism.”
The Deputy Premier was joined by the Special Envoy of the Premier Mr. Benito Wheatley.