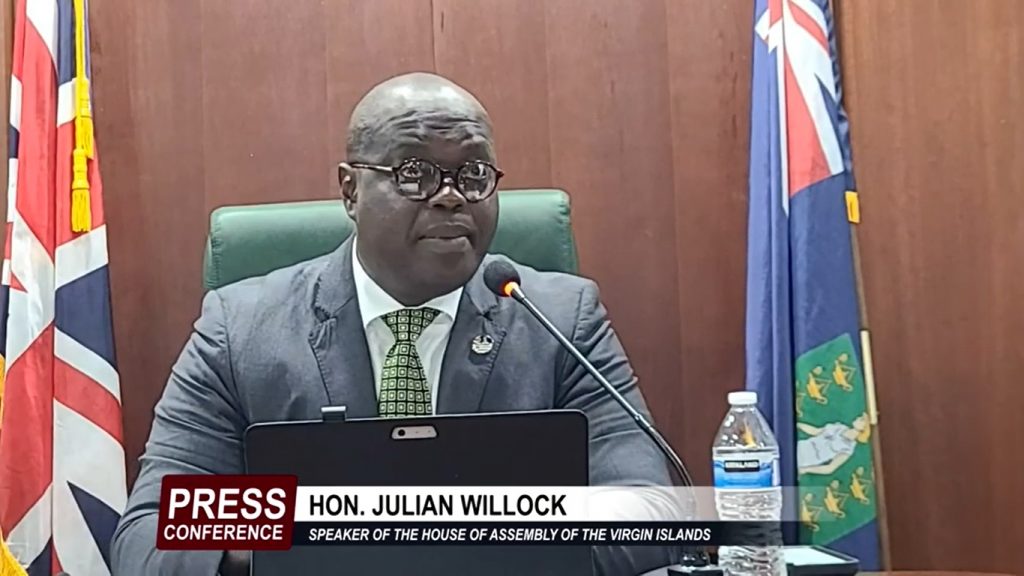 After choosing to discontinue his court case to have an injunction filed against the three attorneys of the Commission of Inquiry, Speaker of the House of Assembly Julian Willock has now disclosed that he is not accepting any responsibility of the nearly $77,000 in legal fees.

This is according to information revealed in a recently published judgement which was handed down in the Eastern Supreme High Court by Justice Adrian Jack.

In mid-August, Speaker Willock filed an injunction to have the COI’s three attorneys Andrew King, Bilal Rawat and Rhea Harrikissoon discontinue from participating in the ongoing Commission of Inquiry, until a ruling was handed down in October, on whether they were legally practicing in the BVI.

But following an August 27 judgement by Justice Jack which stated that Speaker Willock would need the permission of the Attorney General to move forward with the case, he subsequently withdrew the injunction on September 1, after a request was made to the AG to no avail.

According to Justice Jack, the defendants which included the three attorneys and the Commissioner of Inquiry Sir Gary Hickinbottom, were already finalising and filing their skeleton arguments in opposition to the injunction application, when the notice of discontinuance was filed by Speaker Willock’s legal team.

The commercial court judge therefore directed all parties involved in the case to serve a schedule of costs to be paid. The COI’s team claimed a sum of $71,388.59., while the Attorney General issued a claim of $6,084. The judge also warned that these figures were subject to increase after the September 2 hearing.

The Speaker’s legal team Silk Legal, which was represented by attorney Daniel Davies, argued that the court should make no order for costs on two grounds.

The first, that the action brought by Willock was not an ordinary private law action, and was indeed an administrative action in his capacity as Speaker of the House of Assembly, which he argued was acting in the public interest.

The second, was that the BVI Government was paying Willock’s legal fees and would be responsible for liability for the legal costs of other parties.

In response, Justice Jack argued that there were a number of difficulties with the submission from attorney Davies. Most notably, he said that even if he was to consider the grounds of public interest, that option was voided the moment Willock decided to serve a notice of discontinuance, therefore abandoning his pursuit of the public interest.

Justice Jack said if Willock had fought and lost the case, then he could have made the argument that he was acting in the public interest. Instead, the judge said Willock acted unreasonably in abandoning the action at the first indication that there might be procedural difficulties.

He said this caused very substantial costs to be incurred by the defendants to no public benefit whatsoever.

No agreement between Willock and government to pay bill

As it relates to attorney Davies’ second ground that the BVI government was responsible for the payment of the bill, Principal Crown Counsel Fiona Forbes-Vanterpool who appeared on behalf of the Attorney General, disputed that there was any such agreement between the Speaker and the government.

She said that the Attorney-General’s investigations revealed that no such authorisations had been given in this case.

It is not my responsibility

Willock responded by stating, “I make this affidavit to state whether the funding of the action is private or governmental in relation to this matter. I hereby confirm that I instructed the lawyers at Silk Legal (BVI) Inc to pursue this administrative law action on the understanding that the Government of the Virgin Islands is covering the costs/fees of the matter. I have not paid for the lawyers of Silk Legal (BVI) Inc, it is not my responsibility.”

Following the many ambiguities, Justice Jack ordered Willock and members of his legal team Silk Legal, to submit additional information following specific guidelines via an affidavit by 4pm today September 14.

Following this submission, Justice Jack said once all the information has been reviewed, he will make his final ruling on the subject of costs.