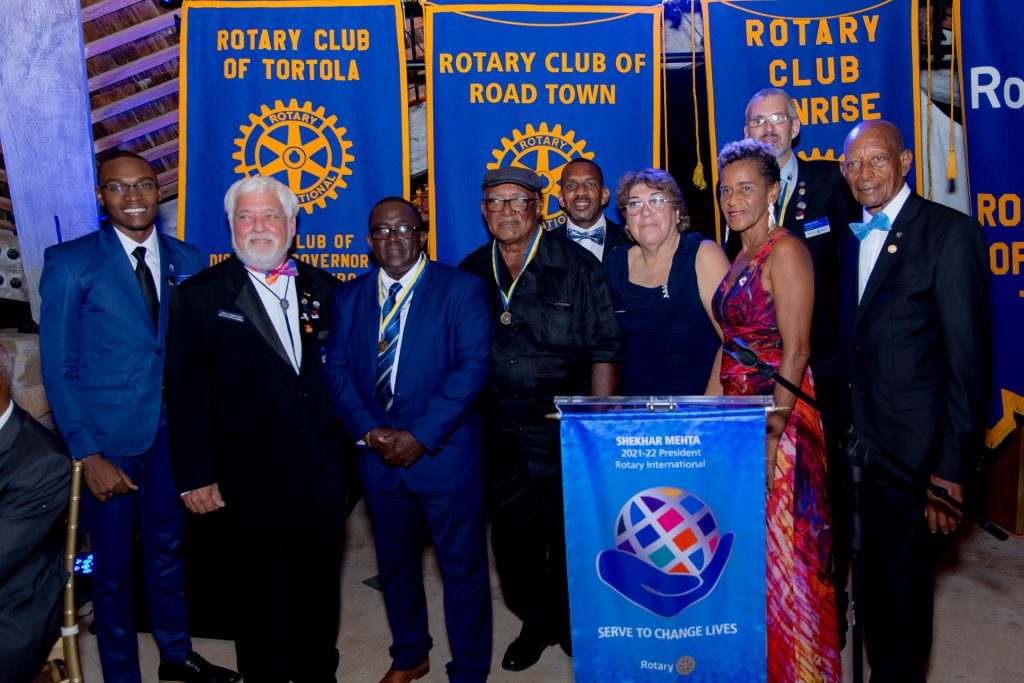 In November the BVI Rotary Family Celebrated the Rotary Foundation to coincide with District Governor Louis Wever and his wife Amanda’s Official Visit to the Territory.

The Grand Fundraiser took place in partnership with Rosewood Little Dix Bay where Mr. Ephraim Penn and Mr. Elwin Anderson Flax were bestowed with the prestigious Community Paul Harris Fellow Award for their contributions to the BVI.

Penn was elected as Commonwealth Games Federation (CGF) Sports Committee Caribbean Representative for the 2019 -2023 quadrennial period and was elected as a member of the Panam Sports Technical Commission in April 2021.

During his current tenure as President of the National Olympic Committee / Commonwealth Games Association since 2008, Penn established the Elite Athlete Programme in partnership with the Ministry of Sports and was instrumental in composing the National Sports Policy of the VI. He also serves as the Chairman of the Long Term Athlete Development Steering Committee and was instrumental in the adoption of the Physical Literacy programme in pre-primary and primary schools in the BVI. Following Hurricane Irma, Penn secured funding and support from Panam Sports for the rebuild of sports facilities in the BVI.

Over the years Mr. Flax has immersed himself in the Virgin Gorda Community.  While building his own businesses he knew that the fabric of Virgin Gorda was its people so he supported the island and its growth in any way he could.   In 1974 he and his wife Norma opened what is now the iconic Fischer’s Cove Beach Hotel.  Here and even now many residents interested in hospitality honed their skills.

Today many are now at premier resorts on Virgin Gorda and the Caribbean.  In fact many often jokingly call Fischer’s Cove the hospitality school of Virgin Gorda.   Also interested in the construction trades Andy formed Andy Flax and Sons Construction.

Such projects completed included Andy’s Chateau de Pirate, Fischer’s Cove Beach Hotel’s many expansions, Saba Rock before the storms as well as Valley Trunk and many other homes on Virgin Gorda.  As a philanthropist he also traveled to Anegada and helped to restore the Methodist Church there. Again the lover of learning and wanting to see others succeed he helped to teach many of his foremen and supervisors the business side of construction.  Some eventually branched out and formed their own companies.

But there is also the other side of Andy..the fun loving side where he has supported and sponsored many a softball team as he is an avid Los Angeles Dodger Fan.  He supports the sport to this day and could be seen most recently at the opening of the Virgin Gorda Softball league of which he is an avid supporter.  He also facilitated the sale of family lands to the government many years ago so that the Jeffrey Caines Basketball Arena could have a proper home. He is also one of the founding members and founder of Virgin Gorda Festival and was honored for this at their 50th anniversary celebrations a few years ago.

The funds raised at the event will not only go to the Rotary Foundation but also to a school project in Virgin Gorda.

The Rotary Foundation is organized as a public charity operated exclusively for charitable purposes and governed by a Board of Trustees. The operations of Rotary International, a member organization, are overseen by its Board of Directors.

The headquarters of Rotary International and The Rotary Foundation are in Evanston, Illinois, USA. We have associate foundations in Australia, Brazil, Canada, Germany, India, Japan, and the United Kingdom.