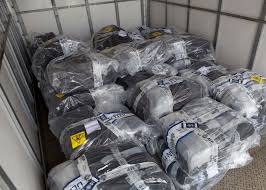 (VI CONSORTIUM) – Two police officers from the St. Thomas-St. John District and members of the V.I. National Guard were caught in Florida’s Opa-Locka County with about 300 kilos of cocaine, well-placed sources with knowledge of the bust have told the Consortium.

According to these sources, who requested anonymity to speak freely on a developing matter, St. Thomas Police Officers Shakim Mike and Tishaun Adams.

Previously, the Consortium reported that former Port Authority Officer Jakelah Adolphine was taken into custody last night as part of the operation, but that information proved to be incorrect, as the publication has since gotten a copy of the complaint, which does not include Mr. Adolphine’s name.

V.I.P.D. Public Information Officer Toby Derima said he was aware of the incident, but refrained from commenting further.

According to the sources, a private jet flew into St. Thomas last night at the Jet Center, a fixed-base operator. The jet did not request pre-clearance from Customs and Border Protection (CBP) in the U.S. Virgin Islands. However, upon arrival to Opa-Locka County in Florida, the jet was searched and over 300 kilos of cocaine discovered.

One source told the Consortium that CBP officers were chasing the police officers, who were trying to evade capture, on the tarmac in Opa-Locka County.