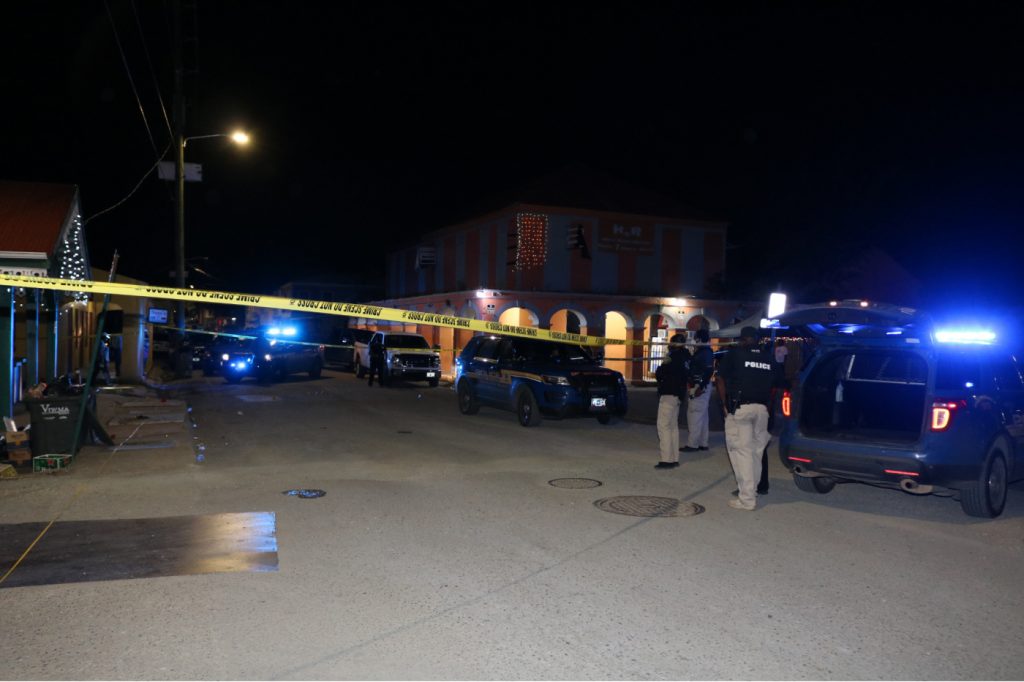 ST. CROIX — Eleven people were shot and four are dead following three violent incidents on St. Croix between Saturday night and the wee hours of Sunday morning, all of which were said to be separate, unrelated occurrences.

V.I.P.D. Public Information Officer Toby Derima stated that one man was dead Saturday night after being shot at the Corner Pocket Nightclub in Estate La Reine, where five others were injured. In total, six people were shot at the Corner Pocket. At least one of the remaining five victims was said to be in critical condition, while the four others sustained non-life-threatening injuries.

According to the police report, there was a dispute between two men, which was broken up by other individuals. One of the men in the dispute was taken away from the area. However, he returned, brandished a firearm, and a shootout ensued between the man who left and returned, and a group of other men. As a result of the exchange of gunfire, six individuals were shot, one succumbing to injuries at the hospital at about 4:45 a.m. Sunday.

Next of kin had not been notified of the deceased victim who was shot at Corner Pocket, said Mr. Derima.

The 911 Emergency Call Center received notification relative to the Corner Pocket incident at about 11:43 p.m.

The three other homicides occurred at two separate locations: one in La Grange, where a woman was shot dead inside her house; the second at the Frederiksted Vegetable Market, where a shooting incident left two individuals dead.

A woman was shot multiple times by assailants after 9:00 p.m during what appeared to be a home invasion incident, police said.

According to Mr. Derima, the 911 Emergency Call Center received a call from a family member of the victim at about 10:08 p.m. Saturday, who said he arrived to his residence and found the victim lying in a pool of blood. The 911 Emergency Call Center had previously received notification of shots fired in La Grange at about 9:49 p.m. It was unclear what was the motive of the incident.

The victim has been identified by next of kin as Elsi Ruiz, 66.

As police officers were responding to the Corner Pocket shooting, another incident was occurring at the Frederiksted Vegetable Market, said Mr. Derima.

The 911 Emergency Call Center received notification of shots fired and multiple injuries at the vegetable market at 12:21 a.m. Sunday. A total of four individuals were shot during the incident.

Officers arrived to the area and discovered an unresponsive Hispanic male under the market.

A number of other victims shot at the vegetable market were taken to the Juan F. Luis Hospital in private vehicles. One of the victims, a female, was being rushed to the hospital when the private vehicle carrying her overturned and crashed near the Clifton Hill area on the Melvin Evans Highway. She along with the driver were taken to the hospital.

The victims who were killed by gunfire at the vegetable market were identified by next of kin as 49-year-old Johnny Martinez, who died on the scene, and 47-year-old David Clouden, who died at the hospital.

Two other individuals received non-life-threatening injuries and were at the hospital receiving treatment as of Sunday morning.

The multiple killings on St. Croix capped a violent week on the island. Just Friday morning, a man was shot to death on Main Street in Williams Delight, bringing total homicides to five in three days. On Tuesday, two Golden Grove Correctional Facility inmates were arrested and charged with first-degree attempted murder for assaulting another inmate with a machete and knife; and on Monday, the police force made multiple domestic violence-related arrests.

Multiple investigations are ongoing into the incidents.