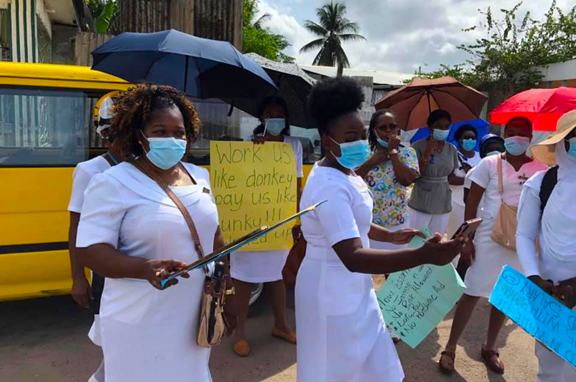 The Guyana Public Service Union (GPSU) Monday said that it will legally challenge the decision by the authorities to lock out nurses and other government employees who have not been vaccinated or refuse to take a PCR test for the coronavirus (COVID-19).

GPSU Vice President, Dawn Gardner, flanked by at least 30 nurses and other workers near the Georgetown Public Hospital Corporation (GPHC).that the union would be filing the necessary legal documents later this week.

Last week, Health Minister Dr Frank Anthony told reporters that senior GPHC staff members and the Linden Hospital Complex have been working to educate health care workers on the importance of being vaccinated.

“We are hopeful that eventually they will come around and understand that it is important for them to protect their own health, even if they only do it for that reason,” Anthony said.

Earlier this month, Vice President Bharrat Jagdeo also expressed disappointment with the vaccine hesitancy being displayed by some doctors and nurses.

Gardner told reporters that the proposed legal action would challenge the alleged breach of “the various laws, the necessary laws” that protect workers.

“There is no law that says that this vaccine is mandatory. You are forcing people now to take what now and there is no law saying you have to get it,” she added.

She said that it was also important for the unions and employers to meet in light of the Occupational Safety and Health Act that requires employers to ensure the working environment is safe,

“The law also states that the employer is responsible for consulting with the workers’ representative so we have to take both into consideration… and we come up with a common position and move forward,” said Gardner.

She said that a PCR test costs GYD$25,000 and reiterated an earlier call for the government to make the tests free of charge rather than requiring workers to do so at private laboratories at their own expense.

The GPSU official said despite the lock-out, some unvaccinated nurses were being allowed “by picking and choosing” into the hospital to perform duties.

”I don’t want to disclose the numbers now. This is information that we will hold until we get to the court,” Gardner said, adding that the Health Minister has been misleading the public on the impact of the lock out.