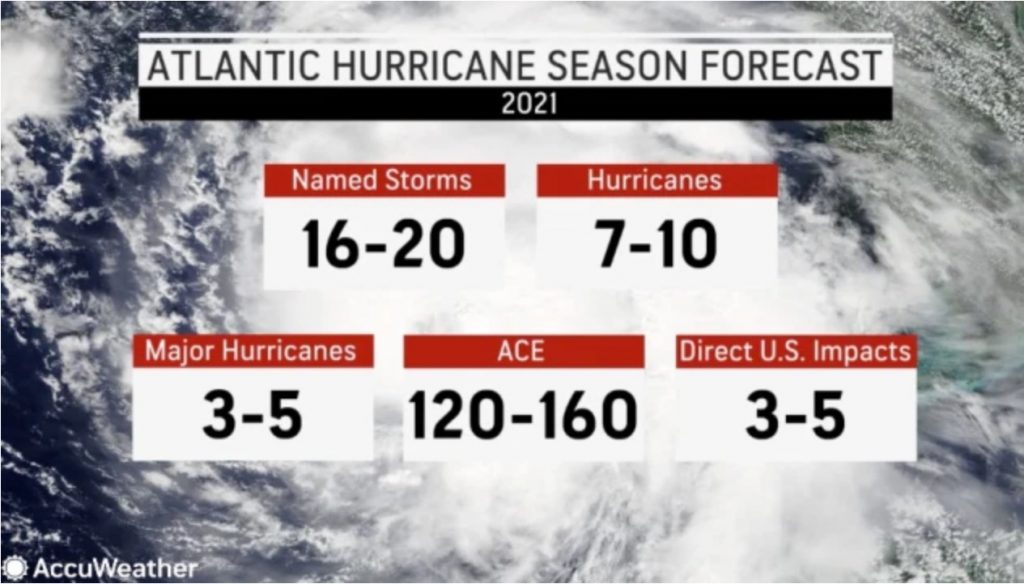 The year 2020 marked the busiest hurricane season on record with 30 named storms, surpassing 2005’s 27. But for those who were expecting a calm after the storm, AccuWeather forecasters are predicting yet another above-normal season in 2021 — though not as busy as 2020 — and are urging those prone to be impacted by hurricanes to be prepared. A normal season is considered to have 14 storms, seven hurricanes and three major hurricanes. Last year, 13 hurricanes formed, and six of those reached the major hurricane threshold.

The AccuWeather forecasters, led by veteran meteorologist Dan Kottlowski, predict that the 2021 Atlantic hurricane season will result in 16-20 named storms, including seven to 10 hurricanes. Of the storms projected to reach hurricane strength, three to five are predicted to become major hurricanes (Category 3 or higher storms that have maximum sustained winds of 111 mph or greater).

In terms of the number of storms that will directly impact the mainland U.S., Puerto Rico and the U.S. Virgin Islands, three to five are expected, according to Kottlowski’s team. The annual average number of direct impacts is 3.5, according to the forecast.

“Current indications are this will be another above-normal season,” said Kottlowski, who is in his 45th year of issuing forecasts for AccuWeather. “This can translate into high impacts on the United States.”

According to the release, to come up with the forecast, Kottlowski and his team examined current weather patterns then studied long-range climate models to make a determination about what will happen during the heart of the season in August, September and early October. There are several key factors that will influence the upcoming season.

La Niña or no La Niña? That is the question

AccuWeather said one of the determinants for how the season will shape up is the El Niño Southern Oscillation (ENSO). ENSO is defined simply as a short-term climate fluctuation that is determined by warming or cooling of the waters in the central and eastern Pacific Ocean. When the water in the equatorial Pacific is warmer than average, an El Niño is typically declared. When the reverse is true, it’s known as a La Niña.

Current forecasts are calling for the existing La Niña pattern to shift to an ENSO-neutral phase by the late spring or early summer which means water temperatures in this zone of the Pacific will be closer to average.

The big question at this time is whether or not the pattern shifts back to a La Niña by the latter part of the hurricane season, according to Kottlowski.

“If that happens, that could certainly increase the chance that we could see more than 20 storms,” he said.

Water temperatures in the Atlantic are already above normal

Troubling signs are already emerging in the western Atlantic. According to Kottlowski, sea-surface temperatures (SSTs) are above normal in the northern and central Gulf of Mexico. Waters in much of the Caribbean and tropical Atlantic are also warmer than normal or around normal.

As of March 29, water temperatures off Key West, Florida, were around 81.5 degrees Fahrenheit, which is about five degrees above normal. Yet, that remains a far cry from March 29, 2020, when the water temperature was 87.8 degrees in the area.

The one exception is the western Gulf of Mexico, where water temperatures at the end of March were cooler than normal due to the historic Arctic outbreak across the South in February. However, those water temperatures are expected to increase by the time the season begins, AccuWeather said.

The official start date to the Atlantic season is June 1, but in recent years, named storms have become common in May and even as early as April. Kottlowski said that based on current trends and the warm waters in the primary tropical breeding grounds of the Atlantic, he expects a “higher-than-normal” chance of a preseason storm to develop this year.

“Our biggest concern is the fact that water temperatures across the Atlantic are already warmer than normal over a larger part of the basin,” Kottlowski said, adding that it won’t take much to make those water temperatures go even higher through the summer and into the peak of the season.

Keeping a close eye on Africa

Hurricanes often form in the far eastern Atlantic after tropical waves that float across Africa emerge over the open waters of the Atlantic and quickly strengthen into more robust storms. A normal to above-normal number of tropical waves is predicted to develop off the African coast this season, due to a weather influencer known as the African easterly jet, which consists of strong low to mid-level winds in the atmosphere over central Africa.

Development is often hindered earlier in tropical seasons due to the presence of dry air and dust that makes their way over the open Atlantic from the Sahara Desert. That is expected to be the case in 2021 as well, Kottlowski said. However, by the peak of the season, the dry air and dust will become less common, which should allow for more tropical development.