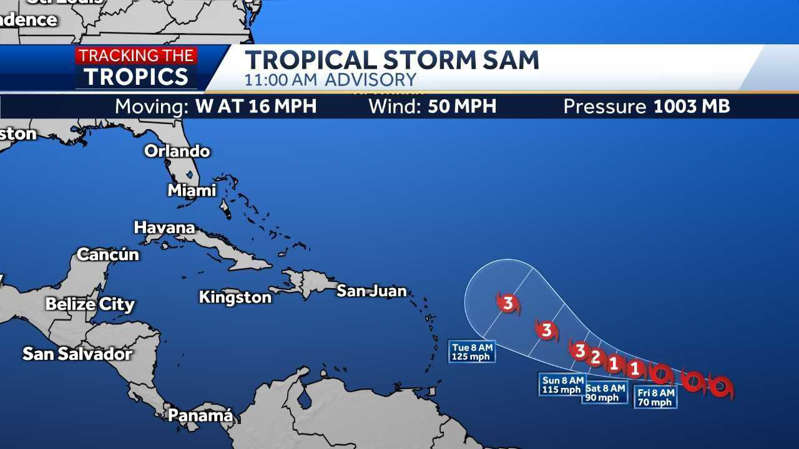 Tropical Storm Sam formed today Thursday. It is the 18th named storm of the season.

Tropical storms Peter and Rose formed over the weekend, but have been downgraded to depressions.

The National Hurricane Center continues to monitor one other disturbance that could become a tropical depression in the Atlantic.

None of them are expected to impact South Florida at this time.

Sam is located 1,745 miles east-southeast of the northern Leeward Islands and has maximum sustained winds of 50 mp. It is moving west at 16 mph.

The storm is expected to strengthen over the next several days and become a hurricane Friday and a major hurricane by the end of the weekend.

There are no watches or warnings for land at this time.

Rose is located 1,300 miles west-northwest of the Cabo Verde Islands with maximum sustained winds of 35 mph. It is moving northwest at 10 mph.

The storm is slowing and weakening.

There are no watches or warnings for land at this time.

This is the last update from the NHC on Rose.

A gale-force, non-tropical low-pressure system, which is the remnants of Odette, is located about 600 miles of the westernmost Azores, the NHC said.

It could acquire some subtropical characteristics as it moves across warmer waters during the middle of the week and forms a small cyclonic loop while in the north-central Atlantic Ocean. It could come back to life and become a zombie storm. By the end of the week, it is expected to encounter harsher conditions.

The formation chance over the next two days is 50% and increases to 60% over five days, according to the NHC.